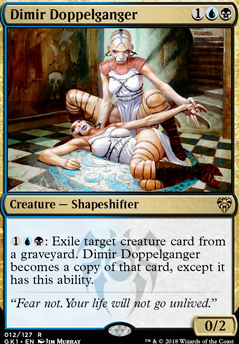 : Exile target creature card from a graveyard. Dimir Doppelganger becomes a copy of that card except it has this ability.

Stealing, Larceny, and all around Thievery
by ThunderThighs

I think your right about re-adding Makeshift Mannequin . As for Dimir Doppelganger it does suck when you cast it and it gets bolted or pathed straight away but it is also nice to be able to fetch it with Fauna Shaman (it was also how the whole deck started). I think I need a little more convincing.

Just clarifying something. As I understand it (and I could be incorrect), if you use Dimir Doppelgangerâs ability to turn it into one of the creatures you plan on exiling from your graveyard, I do not think any of the etb effects of those exiled cards will trigger. Since Dimir Doppelganger is already in play when it changes into a copy of the exiled creature, itâs not entering the battlefield. For this reason (if itâs correct), Iâd recommend just going with the biggest brutes green has to offer instead of stuff like Sundering Titan or Woodfall Primus. Just go with Blightsteel Colossus or Titanoth Rex or the like. You could use Sundering Titan for its âwhen this creature...leaves the battlefieldâ part, at least I think so. Again, get confirmation on all this before readjusting anything. Iâd hate to lead you astray simply because I donât have as good a grasp on the rules as I should. Otherwise, this deck is clever and well built. +1

The Return of Birthing Pod

I really think white just offers more value for less and also provides really good synergy cards. Adding blue and losing Path to Exile, Voice of Resurgence, Siege Rhino, and all the great Flickerwisp targets just doesn't seem worth it for something like Prime Speaker Vannifar, Mulldrifter, Dimir Doppelganger, or Kira, Great Glass-Spinner that would admittedly be good but just slower and not as immediately powerful as what white offers the deck. White is just faster for cheaper.

I have a similar deck I built a while back. I've thought about going back to it and tweaking it a little. https://tappedout.net/mtg-decks/jace-mind-drinker/ Anyway, here are some cool cards.

For milling. I would throw in Glimpse the Unthinkable and Traumatize . Hinder or Reito Lantern followed by Tunnel Vision is nasty too. Mirko Vosk, Mind Drinker and Fleet Swallower