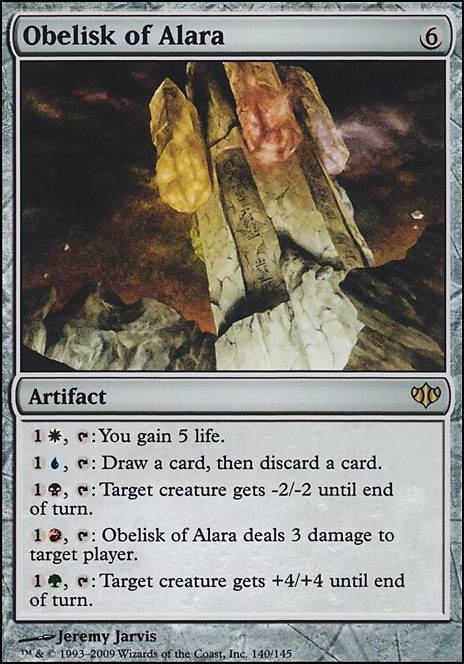 The ELEMENTALS
by Yarok

Everything is a Problem
by SuperWeapons2770 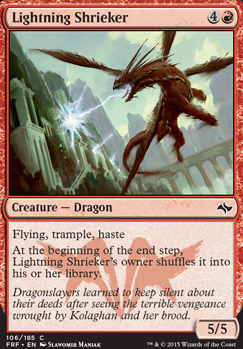 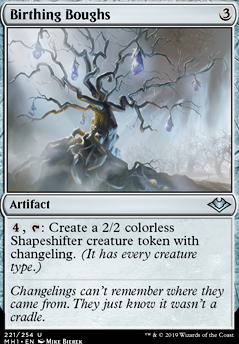 Shane on Help me fine tune this ...

There's Obelisk of Alara, or Starlight Invoker. Not the best options but consistent 5 life.

So ive been adjusting my deck and i wanna know if some of the Kaladesh cards i have woulld be useful (i know Panharmonicon will be but im getting to that point) and i wanna mmake some cuts. Specifically to Obelisk of Alara, Cover of Darkness, Banefire, Moonglove Winnower and Mothdust Changeling.

I'll also take any advice to improve the deck itself, but i want it to be a scarecrow tribal (as much as possible, so i dont wanna go out and get every changeling) focused more on Reaper King and less about 5-color goodstuff.

I'll try to add Jace's Erasure to the mix, but the whole point of this deck is to get the infinite mana and just keep drawing using Jayemdae Tome and Obelisk of Alara. After that I can draw most of my deck, play all the Altar of the Broods that I drew, then play the rest of my cards (minus land), Obelisk of Alara also puts the lands into your graveyard so that Psychic Spiral is even more useful.

Well, monocolored with cards like Feedback Bolt, Shrapnel Blast, Galvanic Blast, etc would be really good, even if you're just getting colored mana from Iron Myr. You should take out Alloy Myr and Obelisk of Alara, and maybe consider adding Westvale Abbey  Flip/Ormendahl, Profane Prince  Flip. He's got excellent synergy with Myr Battlesphere.

enpc on Commander's that aren't a creature.

I honestly think you've already run out of card space at this point. You currently have 5 abilities on the card. One of the only other cards that I can think of that does this is Obelisk of Alara. First of all, look how crapmed the card is and look how short the ability text is.

You also have 5 abilities on your design. I hate to be a bit of a wet blanket, but you won't be able to fit all the abilities you want on the card. And with abilities like these, you can't make the assumption that poeple will just interpret the card how you want. You have to be very clear.

The other vibe I get from the card is that this should actually be black/white, not black/blue.

This is very similar to the Obelisk of Alara. You might consider bumping up the CMC to six, or make the artifact legendary.

For red I would change the damage to player only. Green should be trample and +1/+1. I'd change the blue ability to either have a discard requirement, or counter the non-creature spell if they don't pay one colorless.