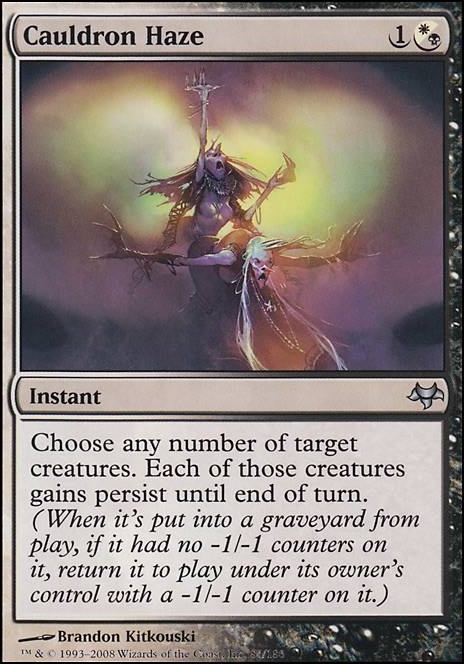 Choose any number of target creatures. Each of those creatures gains persist until end of turn. (When it's put into a graveyard from play, if it had no -1/-1 counters on it, return it to play under its owner's control with a -1/-1 counter on it.)

Kambal - Means of Allocation
by NoNeedToBragoBoutIt

Aminatou- Whims of fate
by Finalzesture

I love to see Cauldron Haze in use. I wonder if I might try to make an aristocratic build centered more around token generating... Cool build!

sergiodelrio on Looking for cards that have â¦

Vexing Devil is all upside in your deck.

Then, maybe think of other cards that bring back creatures from the grave like Unearth. I don't like undying evil because you only have a tiny window to cast it. Cauldron Haze could be interesting also.

Then, you might want some creature that can bring back themselves from the grave, like Gravecrawler. You'll find a lot more on Gatherer.

Then, you might want a sac outlet like Viscera Seer in case your opponents don't kill enough of your stuff or exile them.

Finally, Spark Harvest over Bone Splinters all day every day.

Bonus: Consider running Cauldron Haze in you list if it's not in there already. Kills their stuff with an active Horobi, or saves yours without