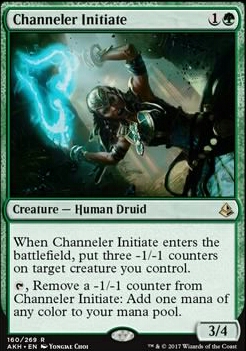 , Remove a -1/-1 counter from Channeler Initiate: Add one mana of any color to your mana pool.

Dinosaur you made dinosaurs!!!
by [email protected]

Let's End This Quickly
by Raptor167

Hey, good to see another player building around -1/-1 counters!! Iâve got my own build here, which has gone done quite a different direction, but iâve tried to detail the archtypes problems and solutions there.

For your deck, i have the following suggestions:

Thats the list and any suggestions would be really appreciated. I'm not sure about the sideboard or Hydroid Krasis or Channeler Initiate

I don't Know how old is your list, but you can also play Devoted Druid and Channeler Initiate for added necrotic ooze combo.

Now we can mimic Devoted Druid's ability to by adding a -1/-1 counter to our 4/4 making it a 3/3. This ability requires no mana to activate, it just needs the -1/-1 counter. We effectively gain +2/+2 every time we repeat this cycle.

Now it's this next cycle that I think you may have missed. :)

That said, I do have Channeler Initiate in the deck as an additional way to generate mana in the other combos so it's a great card to include!