Deathtouch (Any amount of damage this dealt to a creature is enough to destroy it.)

Whenever another creature dies, each opponent loses 1 life.

Poison-Tip Archer occurrence in decks from the last year 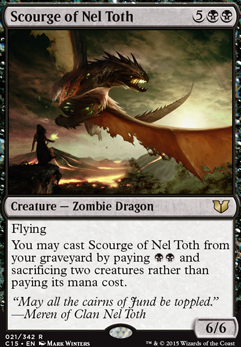 Thanks for the feedback! I definitely agree with you on the mana cost for my creatures. Adjusted the deck to remove Poison-Tip Archer, 1 Xathrid Gorgon and 2 Sword of Vengeance. In return I added 2 Gnarlwood Dryad and 2 Rancor.

Rancor definitely helps pump the creatures more and hopefully Gnarlwood is a cheap 1/1 w/ an occasional option as a 3/3.

I've only had the chance to play the deck once in my playgroup, and it performed pretty well, but my play group is very casual and also awful at threat assessment, so I wasn't punished for my slower turns (that I had a lot of due to your aforementioned lack of engines, almost entirely relying on Altar of Dementia to "go off") and could just slowly set up until I had some of my very janky pieces out (Ayara, First of Locthwain+Poison-Tip Archer+Diregraf Captain+Altar of Dementia+Sidisi, Brood Tyrant.)

There's definitely about 16 cards in the deck that are easy drops no questions asked.

The Gitrog Monster, and any Dredge cards were all cards I would have thrown in if I had them, although your suggestions specifically look tantalizing and better than my "dur, says Dredge throw it in"

Since this deck was mostly me wanting to do something with Syr Konrad, the Grim and Ayara, First of Locthwain my personal focus is just a sort of death by a thousand cuts more than a token strategy with the cards I had available.

Zakuzelo... you raise good points with Obelisk Spider... I haven't had it in the deck for quite awhile, but I guess I leaned more toward Poison-Tip Archer because I was seeing a lot of sacrificing among my opponents, and liked the fact that PTA triggered on death, not counters. But now that I run so many cards with counters, Obelisk Spider may be the better choice, especially considering its CMC. (I have not tried Yawgmoth, Thran Physician yet as I don't have any copies.)