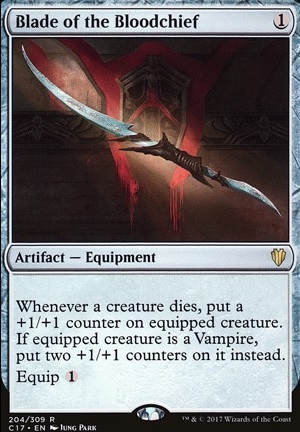 Edgar Markov- If you build it they will come
by ghandio

Blade of the Bloodchief Discussion

When I've played mono black vamps, I've always felt like the variety in build options is its biggest strength. The tribe has so many cards and support options that aren't quite good enough to make it competitive in tournament formats with published decklists, but flood you with great options.

Outside of that, noone knows if you are running big dire moon with Blade of the Bloodchief, value midrange backed by thoughtsieze and whip of erebos, some janky combo that plays the deathtouch/lifelink to fight off aggro/midrange or if you swapped to the rack for a bit. Heck, I've run bad moon lifelink with bloodcrank. (Bad moon isn't good though, and it got worse when people started packing enchantment answers, and bloodcrank is really unreliable).

The 'core' of the deck I preferred was cordial+aristocrat, then 1 drops and nocturnus for a more aggro style, or deathtouch/lifelink, removal and artifact power cards.

Changes, 19 Mar 2022:-1 Divine Reckoning, +1 Tragic Arrogance. Simply because my LGS didn't happen to have a copy of Reckoning. Arrogance might allow my opponents to keep more stuff, but I get to choose which stuff it is. Most importantly, they're both board wipes that will leave Elenda standing and witness to all the other death.

-1 Varragoth, Bloodsky Sire, +1 Cathars' Crusade. This was really a move to include Blade of the Bloodchief, since my LGS didn't have one of them either and I just got my hands on it. Crusade had taken its place in the meantime. Varragoth came out because I have enough tutor effects between the spells and Razaketh. Blade of the Bloodchief makes Elenda 3x more Elenda-ier, and has several other vampire options should she not yet be on the battlefield. Crusade I want to include because this deck's commander cares quite a lot about having +1/+1 counters, and with The Ozolith also being a factor, this could see an enormous amount of utility if every creature gets counters on ETBs and they can all pass them to Elenda. Should be fun.

Edgar Markov is not dead

I just have a few suggestions that I think the deck a little faster and more consistent.

First, all of your creatures are pretty expensive! I would trim down on a few of the more expensive legendary creatures, and add some more aggressive style creatures.

I also think that your cards like Gleam of Battle, Coat of Arms, and Blade of the Bloodchief are just a bit too slow and only really help when youâre already ahead on board. If youâre behind, or the board is stalled, they donât help much.

I think you should add some removal spells like Heartless Act, Murderous Rider (not a vampire but a creature after the removal spell!), Doom Blade, Path to Exile, or Condemn. There are a ton of removal spells so if you want more suggestions I can help out.

I hope it doesnât seem like Iâm ripping your deck apart! I think itâs really sweet! I would just play a little more aggressive of a deck if it were mine! Dusk Legion Zealot isnâtbig but it draws a card and can get big quickly with your other cards.

Gifted Aetherborn is another cheap vampire with lifelink and deathtouch!

You might like these: Reyhan, Last of the Abzan , Death's Presence , Cauldron of Souls , Hydra's Growth , Invigorating Surge , Fractal Harness , Kalonian Hydra , Sadistic Glee , Eternal Thirst , Blade of the Bloodchief