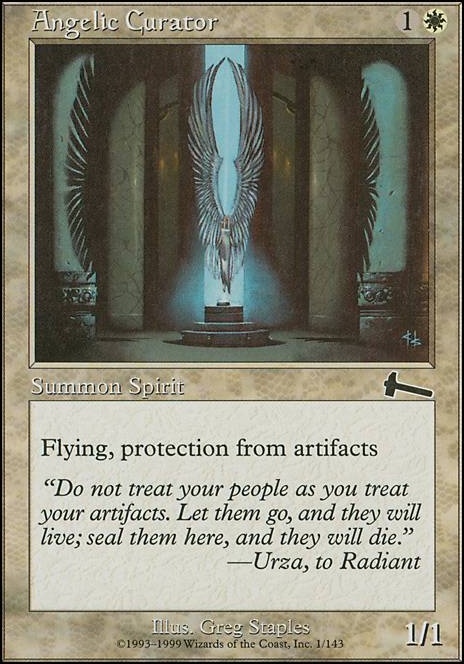 Opal Archangel is better than an Archangel because it still becomes a 5/5 with flying vigilance pretty easily while only costing 5 mana. Lyra Dawnbringer is out of my price range for sure.

Wesley Burt's Anguished Unmaking is one of the most powerful card arts I have ever seen. Sorin's pose is perfect--the way he cannot look at his creation, how he hangs his head in despair. How his mouth is slightly ajar with revulsion at what he had to do. The burning soul in Sorin's hand and on his blade. The blood on Avacyn's wings. The subtle hints of flame. The smoke as she becomes incorporeal. The cast down symbol of Avacyn in the lower left corner. Every detail on this card is perfectly designed to tell a tragic story, and make you truly feel the planeswalker's anguish.

Beyond that, I really enjoy the more classically medieval art found in some of the older sets--frankly, I think MTG's artists have been trying a bit too hard on the realism side of things, and would love to see a return to some of the more stylistic art of ancient days. In this older style, some notables are:

I would recommend taking out Archangel, 7 for a 5/5 with flying and vigilance just isn't good. Also, Aerial Maneuver doesn't really seem necessary since all of your main hitters already have flying. As far as removal goes, Angelic Edict is not good at all, if you want enchantment exile, Revoke Existence is better, and if you want creature exile then cards like Path to Exile or Swords to Plowshares are way better. If you're trying to go more budget, you could also use Unmake. Hope this helps!

These are angels you could add

I think you could take out Emancipation Angel, Illusory Angel, Guardian Seraph, Indomitable Archangel, Lightkeeper of Emeria, Malach of the Dawn, Seraph of Dawn, Avenging Angel, Herald of the Host, Patron of the Valiant, Dawnbreak Reclaimer, Archangel, Angel of Salvation

I also think you could cut some lands, 38 is a good number. Bant Panorama, Seaside Citadel are good to add back in

It seems like your heavy hitters are 4 mana and up, so i think your ramp should cost less than 4. This way you're not decieding betweenn casting an angel or ramping for other angels. Maybe cut Explosive Vegetation for Rampant Growth. you could cut Belbe's Portal and Quicksilver Amulet for that same reasoning. You could add Simic Signet, Selesnya Signet and Azorius Signet for more ramp as well

You could run some anthems to pump your team as well, I think Door of Destinies could be really good in this type of deck

Lurking Predators is the Quicksilver Amulet type effect you want i think. maybe take out Selvala's Stampede for it?

Growth and Protection for All

Here's some things to consider.

I do agree with some of the other comments about mana ramp spells like Kodama's Reach and Cultivate.

I would remove the Oath of Ajani since you only have one planeswalker and the ++ counter isn't that great. If you're going to expand on the ++ counter theme, then look at Fertilid, Spike Weaver, or Spike Feeder and other cards to take advantage of those counters.

I would also remove the Arrest, Choking Restraints, Faith Unbroken, and Squirrel Nest as they don't really push your agenda. Garruk, Primal Hunter and the Sword of Body and Mind are good cards but they feel out of place in this deck. Consider removing Archangel and Serra Angel since they really don't have much beyond flying and/or vigilence.

Also consider Riftstone Portal to give all of your lands access to both colors of mana. Krosan Verge is a great card for this deck. With a Riftstone Portal in your graveyard, Terramorphic Expanse and Evolving Wilds can tap for colored mana.

Cartographer or Tilling Treefolk work great with the Krosan Verge, Terramorphic Expanse, and Evolving Wilds. They also help with the Armageddon.

Jotun Grunt and Gurzigost could give you some graveyard recursion.