When Armada Wurm enters the battlefield create a 5/5 Wurm creature token with trample. 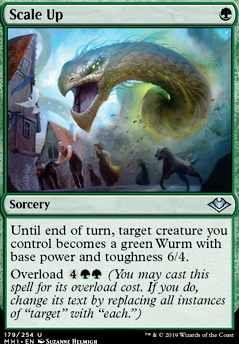 eliakimras Not to mention Porncock....er-Armada Wurm has some of the best art in MtG. I also tend to call them dickwurms for flavor

Some others: Skyclave Apparition, Siege Rhino, Armada Wurm, Solitude (and Grief if you add black), Eternal Witness (which can be looped with Primal Command), Wall of Omens, Acidic Slime, Tolsimir, Friend of Wolves

Liking the list! Trying to build a cEDH deck of Emiel since his first ability is such a great infinite mana dump. Might recommend running an Umbral Mantle combo with Priest of Titania out (with 4+ other elves on the field) or Karametra's Acolyte with ample devotion. Basically any dork that taps for 4+ mana plus the mantle is infinite mana, bounce the Acidic Slime as much as I want to destroy all their artifacts, enchantments, and lands!Or Infinite Tokens with Armada Wurm or Thragtusk! The possibilities! Also, great include on the Incubation Druid, didn't realize that interaction at first.