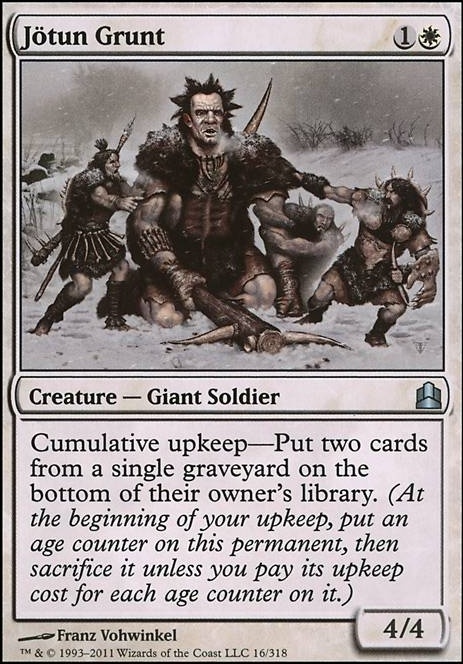 Cumulative upkeep-Put two cards in a single graveyard on the bottom of their owner's library. (At the beginning of your upkeep, put an age counter on this permanent, then sacrifice it unless you pay its upkeep cost for each age counter on it.)

Jotun Grunt , Mistveil Plains , and Conjurer's Bauble all provide excellent redundancy and backup for Lin's second ability. Not Forgotten is an underrated and flexible piece that can provide the same function, get your card (not just creatures) back, keep your opponent from reanimating/recurring their card, or even put a dead card on top of their library to screw over their next draw step!

What I'm talking about is this: You walk into your store with your janky deck and play a few games where you practically shut specific players out of the game. They're likely going to think your primary objective was to invalidate the gameplay experience for them specifically. It's not going to be about running some old janky hate cards for them. It's going to be about you personally picking on them. If they feel personally targeted, they may return the favor in kind and make sure your play experience will be as unfun as possible in the future. None of this solves any issues in your playergroup. The way you avoid frustration among people is by clarifying expectations and fostering open communication.

I'm a hardcore spike and all I want to do is play cEDH. My best friends all want to play at a step below that power. No one is going to have fun (not even me) if I come to our sessions with Shimmer Zur or something.

You're headed down the wrong path, my friend.

If you want to play Gwafa Hazid, Profiteer and make sure people can still have fun, think of running cards like Ghostly Prison and Hushwing Gryff over cards like Rest in Peace and Acid Rain. If you want to run graveyard hate, for example, Rest in Peace is a fantastic card but can lead to a graveyard focused deck to struggle immensely. You can contrast it with something like Jotun Grunt which can still make sure they don't go out of hand but can still allow graveyard players to have fun.

No Detention Sphere? I always thought Esper did best with a Gifts Ungiven shell. Have you ever tried Jotun Grunt over Glory-Bound Initiate?

Xica on What are some cheap creatures â¦

There is Quirion Dryad & Deeproot Champion as its second playset.

White has Jotun Grunt, which can act as a weird hybrid of goyf and ooze, and is devastating against decks that utilize their graveyard.And there is Moldgraf Scavenger, and Exemplar of Strength (which is miles better in a deck that runs things like Quillspike or Nest of Scarabs).There is plenty to choose from.

Love the deck, I run a very similar deck to this one:

Some advice on sideboard.

Fragmentize is a key peice in mono-white aggro-midrange, Disenchant is another version.

Tormod's Crypt, Relic of Progenitus, Jotun Grunt (My favorite), and Rest in Piece against dredge, delve, snapcaster, reanimator, flashback, recursion, or any other graveyard deck.

Aegis of the Gods and Leyline of Sanctity against hand disruption.