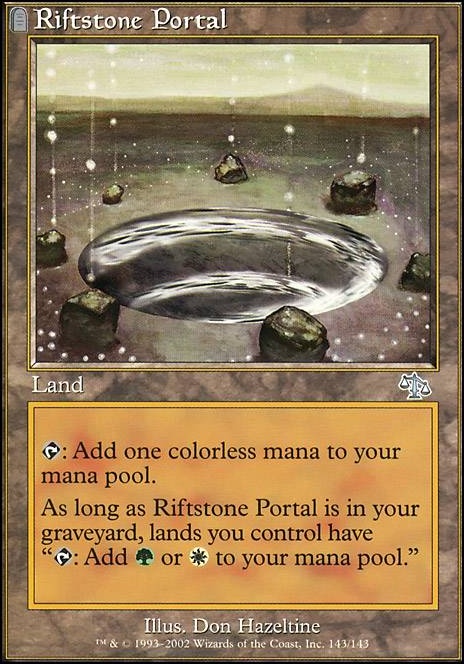 As long as Riftstone Portal is in your graveyard, lands you control have "Tap: Add {{G}} or {{W}} to your mana pool."

Riftstone Portal occurrence in decks from the last year 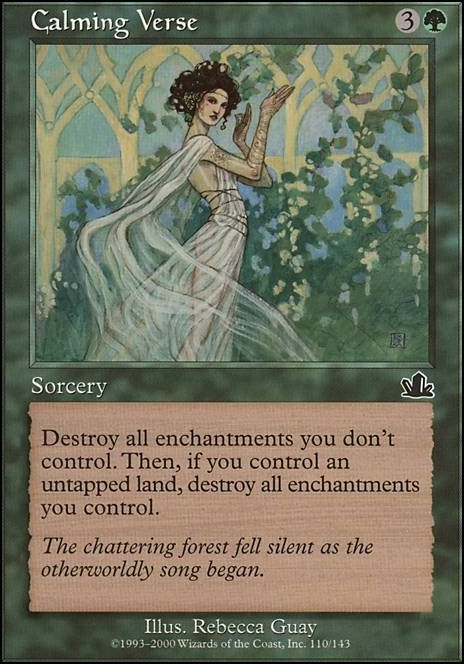 Hey m_to_the_three, thanks for checking out my baby!

Living Plane is a dastardly card, perfectly at home in a lands shenanigans deck. Nature's revolt is a great budget option that will save you more than a hundred bucks at the expense of a single additional mana. I point this out only because of your comment about infinite combos, but if you didn't know, both of these cards have a pretty brutal effect when your Elesh Norn is in play: murdering all of your opponent's lands.

I really dig your lands-matter take on Hazezon; I think this is the first time I've seen another one before! The new land Lotus Field would be a great addition, comboing nicely with Splendid Reclamation and Riftstone Portal , among other things. Speaking of which, Flagstones of Trokair seems like a must-add for your deck too!

Keep up the good work, friend!

I have some possible suggestions for colorless mana sources for Displacer. In my experience the more times you can activate it the more value you can get so I have all these extra colorless sources in my deck that uses Displacer:

Bant Panorama and Naya Panorama : Theses can tap for colorless if you need it and can get either of your basic lands if you don't

Riftstone Portal : Can tap for colorless while it's on the field and if it ends up in the graveyard can let you lands tap for either of your colors(maybe not as important in a two color deck but it could help). I have Harrow and Crop Rotation in my deck to help get it in the graveyard.

Wooded Bastion : Really good land overall and can easily slot in for almost any of your current lands. Can make both your colors and can tap for colorless if you need it.

It might not be a bad idea to throw in a couple of Wastes as well that you can tutor up with Cultivate . Oh, and don't forget that Reflecting Pool can tap for colorless if you have another land that taps for colorless.

EsperControl4Life thanks for the upvote and comment! We like Harrow here so we can sac our Riftstone Portal to the graveyard and open up our colors. I agree this deck isn't competitive for legacy but no one sees it coming; which is great to witness!

multimedia Thank you for the tips. To answer some of your questions

Land/ Ramp- people have told me i have to few lands, with too few ramps, I get that a lot. In playing people I actually haven't had any trouble with mana surprisingly. I do have 13 ramps, and 4 that turn all my lands into multiple colors... Chromatic Lantern , Riftstone Portal , Urborg, Tomb of Yawgmoth , and Mycosynth Lattice (Mycosynth lattice is a funny one that allows me to destroy everyones lands). I should still probably add Sol Ring like you said, it seems to be a staple and pretty good. There is mostly basics because well not just blood moon but i have a combo in the deck Scouting Trek + Animist's Awakening that allows me to pull all my basic lands out at once, and untapped. Could be a good combo or not it really is up to personal perspective i guess?

I like the idea of mana dorks, I just sac everything so i don't use them. Mostly i try to have every card in the deck have a double use.. at least trying.

Deathrite Shaman I just like this card and should add it you are right. Eladamri's Call I am not actually aware of why i haven't included this in the Deck its a cheap tutor. Scavenging Ooze I don't know why this isn't in the deck. Procrastination i guess? ha it's a killer card.

These are just some reasonings behind what i do if you have any feedback on the reasonings i am more than happy to have an open mind. Im all eyes. I would like to know also what you would have cut.

hkhssweiss, I think you're right. Working with the mass land advantage the deck is able to abuse leveraging Ob Nixilis, Unshackled built in punishment, I think it's not just a flavour win, but a great strategy to work with the landfall ability Ob Nixilis, the Fallen. It turns into an Ob Nixilis pain deck that seems pretty effective if I can get either one out.

Gold star for the Glacial Chasm recommendation. While a little out of my budget for now, it seems like a must have card to pillowfort so I can setup, especially because of the direct pain the Ob Nixilis strategy can cause. Then, if I get situated with a giant Ob Nixilis or an army of tokens from the landfall token generation, I could sack Glacial Chasm to The Gitrog Monster for a big swing... then play it again with Crucible of Worlds or Ramunap Excavator for another safe go-round!

Riftstone Portal is fantastic - a nice little extra tuning card. And you're right, both those lands extra good with the amount of "search for any land" cards in the deck.

When I build it and as I play it, I'll be keeping Azusa, Lost but Seeking, Oracle of Mul Daya and Exploration in mind for future investments to tune it up. Making sure I can play and replay Field of Ruin as many times as possible in a turn is a decent strategy :).

Good call on Birthing Pod. I'm actually looking for one for my Kresh deck right now, but it'd be perfect in here. Especialy (as you said) for chaining Ghave into Ob Nixilis! How perfect. Hmmmm, I guess if I sacrificed Veteran Explorer to chain into Ob Nixilis, Unshackled, I'd have to reveal it before they chose to search for the land or not, hey? I couldn't surprise them? I wonder how that all works on the stack and how I could abuse it - I guess I could still chain into Ob Nixilis with another creature out. Still good mana-ramp value if either Ob Nixilis is out and using Ghave to sac him. I'll think about that as the final deck list comes together.

thanks for reminding me about Heroic Intervention. It's come into my mind a couple times for this deck, just never when I was online to add it - I do have the card though, so it's a natural include!

Thanks for more great insight, hkhssweiss!