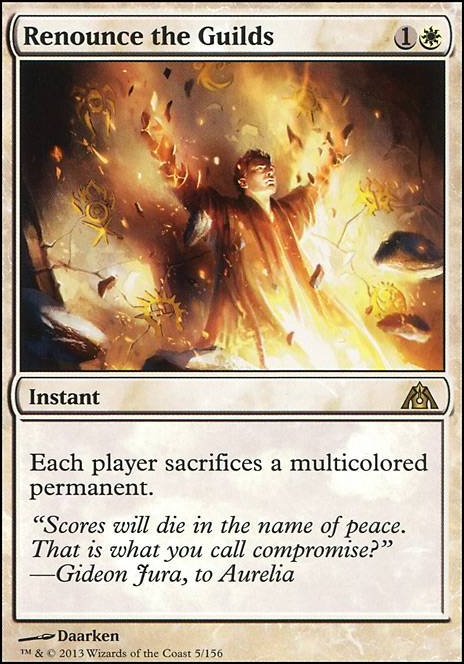 Each player sacrifices a multicolored permanent.

Darien, King of Combo
by rerikson

It's Got A Angel
by SaltyTwist 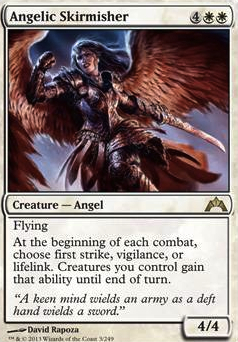 Sylvan Caryatid is the bird you can't bolt and Fertile Ground is an enchantment, so less removal exists. Fleecemane Lion won't die to creature damage, since it's a destroy effect, the only thing that will kill it is board wipes like Languish or sacrifice effects Renounce the Guilds. Your opponent has to spend removal on it before it's monstrous, which means they can't remove something else later. As for it only being a 4/4, Hollow One is a 4/4 and it defined a modern deck...

If you want an Anointed Procession deck (also known as Parallel Lives) then Voice of Resurgence, Mimic Vat, Soul Foundry and Rhys the Redeemed spring to mind alongside the cards I mentioned earlier...

I would take a look at my boy Sram, Senior Artificer. He will draw you a truckload of cards while you suit up your pupper. He also has a neat interaction with flickering ward to continually draw cards.

Renounce the Guilds is a fun "Gotha" card and is excellent at killing commanders.

If you are into infect, Grafted Exoskeleton will get you there.

Hero's Blade is like a permanent buff to your commander and the auto equip is great.

Quietus Spike will instantly kill an opponent above 40 life and is a huge threat by itself.

OUT: Sigarda's Aid, Renounce the Guilds, IN: Thalia, Heretic Cathar, Hammer of Nazahn

Healer of the Pride

I don't know how I feel about Renounce the Guilds... You could probably take it out for Konda's Banner, which pulls double duty in making cats and pumping cats.