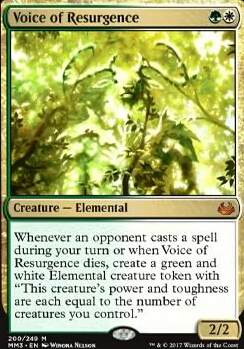 Whenever an opponent casts a spell during your turn or when Voice of Resurgence dies, create a green and white Elemental creature token with "This creature's power and toughness are each equal to the number of creatures you control."

Voice of Resurgence occurrence in decks from the last year

Who reads this anyway EDIT: Read*
by spacecoyote1313

Thats a lot of guys
by Vast_Desolation

Saskia, the beater
by renasboi

Have you considered adding Voice of Resurgence? It seems like a perfect anti-control/burn card that adds a decent amount of tempo to the board. Either way I like the strategy, just be careful because modern is chalk full of removal spells and if they take any of your combo pieces things can get dicey very fast.

If price isnât an issue, Iâd recommend Rhys the Redeemed and Voice of Resurgence. Iâd also recommend control cards like Path to Exile or the multi-purpose Beast Within.

Crested Sunmare has an amusing synergy with Trostani, but may not be much use without her.

This gives me Voice of Resurgence flashbacks. It seems a bit too busty for a 2 CMC.

Although the body itself is comparable to Strangleroot Geist which was a strong limited card and only used sparingly in aggro decks at competitive levels. It was also the time of Flinthoof Boar - which granted was during a much faster environment than it is atm. Maybe it's okay.

Remember that there is competitive modern and 'competitive modern'. There are things you can do at local FNM which doesn't hold up in bigger competitions. You don't have to plan for the entire meta, just the decks you are likely to face.

As someone new to more competitive settings trying to play off-meta, I highly rate transformative sideboards. You can improve almost any matchup by sideboarding 15 cards (or fourteen with companion), and viewing your maindeck as a place to store sideboard cards (which can be swapped in bad matchups).

As a deck which 'relies' on risen reef combo, put thought in your backup gameplan. Your Jegantha choice offers a backup combo with something like Freed from the Real, while only taking up four slots. This is the right direction, however in specific it faces the same problems- a weakness to removal- as the maindeck. Testing alternatives, both main and side will be most of the process for this.

Don't feel the need to settle into one list- unpredictablity is a major asset for every list that isn't already highly-tuned. Your opponent will misidentify control or beatdown matchups, netting easy wins, especially with sideboard mixups.

For a time, Voice of Resurgence was the big reason to play midrange, and its still pretty solid. Value with Vesperlark/thunderkin is decent if you can avoid grave hate- sideboarding in a set of mana leak/spell pierce is legit if they don't have a fast clock.

I'd also give some serious consideration to elemental token producers. Seasoned Pyromancer and Young Pyromancer are spectacular with reef and strong without.

Finally, look at Jeskai Ascendancy combo lists. Its fallen out of favour due to disruptability, but faces a lot of the same deckbuilding restrictions you are under. Similarly, Reveillark/Body Double was a deck that never really took off. Runaway Steam-Kin had a few combos theory crafted that never made it. I'm sure there are things in these lists you can adapt. I'm sure that between all of these you can find something that runs nicely. Playtest well, and have fun.

Really ? I do not know the current modern metagame but I can see going into a Birds of Paradise followed by Fiend Artisan and Stitcher's Supplier than either saccing it to get Voice of Resurgence or Renegade Rallier the next turn. If you get voice you can than sac it, get the token, get renegade and get voice again... Sounds like a tough board to deal with and your hand is still full of cards.

If playing Lurrus of the Dream-Den I guess this strategy goes out the window because of the two mana or less clause, but again it seems strong to recur voices and fiend artisan from your grave.

I know your deck is more combo centric, but I like to look at the different angles it could be taken from and still kept intact.