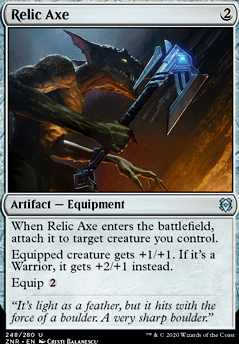 When Relic Axe enters the battlefield, attach it to target creature you control.

Looks fun. I disagree with the other commenters regarding draw/recovery. I think that these partners are best played as a glass-cannon, all or nothing, win early or bust strategy. This is just my 2 cents but I would make the following swaps:

Champion of the Flame -> Neheb, the Eternal

Koth of the Hammer -> Relentless Assault

Whispersilk Cloak -> Champion's Helm. Rograkh having shroud could be problematic for you.

I really like the deck but i feel Relic Axe is way to slow.