When Apex Altisaur enters the battlefield, it fights up to one target creature you don't control.

Enrage â Whenever Apex Altisaur is dealt damage, it fights up to one target creature you don't control. 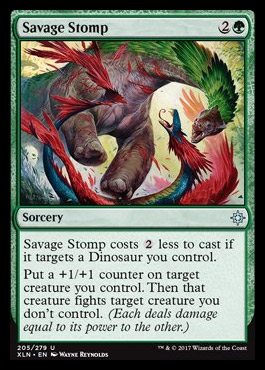 I highly suggest you read through this thread on a dino deck I was helping a guy with a while back. Since then, I think Apex Altisaur and Runic Armasaur are the only new dinos I'd put in.

For creature decks like this, I try to prioritize not just big creatures but also creatures that can replace noncreature spells. This lets your deck be interactive while not deviating from the main plan.

Surrak, the Hunt Caller is a haste enabler that can also be played with Mayael! To make matters even better, he's

Blazing Archon because why not?

Vorinclex, Voice of Hunger is a really nasty version of Mirari's Wake on a big stick. Regal Behemoth offers another creature version of a mana doubler. Your deck needs all the mana it can get.

Apex Altisaur can remove a lot of creatures for you.

I've only got 2 noncreature suggestions for you. Traverse the Outlands gets you a ton of mana. Illusionist's Bracers is great because getting a copy of Mayael's ability is nothing to scoff at.

mayael is so much fun! There are so many big creatures that she's easy toHere are some thoughts I've got for you.

Surrak, the Hunt Caller is a haste enabler at 5 power but only 4 mana. He's great to just cast, to get with Mayael, and gives haste!

Thorn Mammoth and Apex Altisaur are removal on a stick. Creature decks like Mayael love having creatures that also work like instants/sorceries. Almost strictly better than Territorial Allosaurus who can't trigger with Mayael's ability anyway. Definitely better than Gruul Ragebeast who forces even your mana dorks to fight, usually killing them.

Faeburrow Elder taps for a TON of mana. Great in any 3+ color deck. So is Bloom Tender but she's too expensive. $, not mana cost.

Ilharg, the Raze-Boar does everything Mayael can't do, covering your largest weakness of not being able to cast cards from your hand!

Archetype of Endurance for those games when you know you'll have a target on your head. Works like Asceticism .

Seedborn Muse is one of the best upgrades for your deck. Using Mayael on every turn? Sign me up!

Etali, Primal Storm solves any problems you have with card advantage. He wins games. Period.

Speaking of card advantage, Soul of the Harvest gets cards and has over 5 power.

A couple of fun cards I'd think about looking at: Mayael's Aria can be a ton of fun. Apex Altisaur is an amazing board wipe for the deck, as is Bane of Progress . Faeburrow Elder is an excellent mana dork that can tap for 3 mana, Drumhunter is slow for a mana dork but also draws cards. Congregation at Dawn is handy for picking a creature to have Mayael dump onto the battlefield

I think you may have mixed something up... You have 8 Goreclaw and Raptor Hatchling. I assume there was meant to be 8 forests and mountains instead?