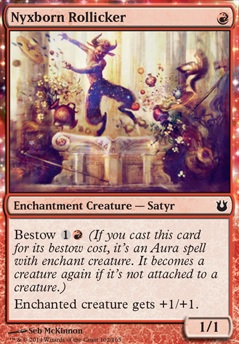 Gallia of the Endless Satyrs
by Gillface 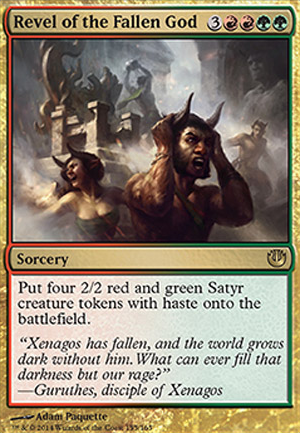 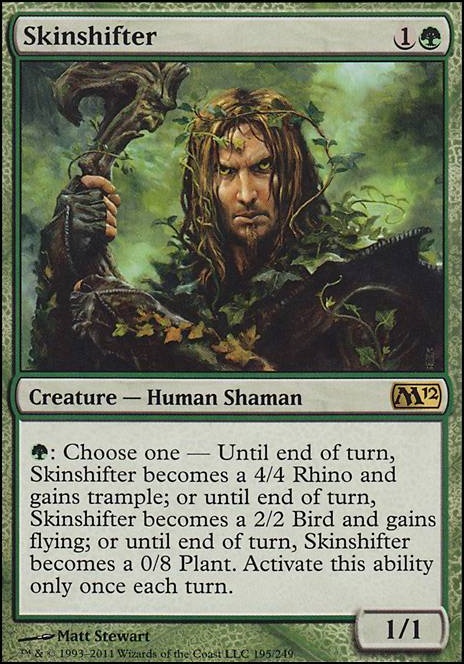 Tfw not being choked by satyr gf
by benjamon1111

If you're looking for an 'interactive' aura, Flamespeaker's Will is cheap and can pop an annoying artifact without slowing down your combat.

For a less efficient, but kinda spicy idea Nyxborn Rollicker can come down early to block or be cast later as a (somewhat overcosted) aura.

Nyxborn Rollicker is surprisingly functional in heroic setups. Satyr Firedancer is pretty close to unplayable, unless you have a Basilisk Collar . Reckless Reveler is pretty much sideboardable, given the other options. Setessan Oathsworn is almost playable, if you desperatly abuse Shimmering Wings and Arcanum Wings with the occasional Eldrazi Conscription .

Cards that you should take out: Infectious Bloodlust (unless you add 2 more) Flamespeaker's Will, Ancient Grudge is waayy better, Great Furnace They are not modern! lol, Whims of the Fates its just not good, Gruul Guildgate, Nyxborn Rollicker a 1/1 for is not good in modern. Cards to Add: Burning-Tree Shaman its good as a 3/4 for 3 and can only get better, Temple of Abandon, Cinder Glade while these are not needed they will be nice. Sorry that this is kinda short, this is my second time writing this and I got a bit impatient.....

Hey, just a few suggestions for budget boros weenie that I think are worth having a think about.

Doomed Traveler isn't a bit hitter, but is removal and wrath protection, and can teach about card value. Dragon Hunter, one mana 2/1 with a slight upside, can't complain about that really, basically an Elite Vanguard. Goblin Glory Chaser is a one mana 2/2 menace (in theory), a different mechanic to play with, and can hit hard. Another new mechanic for the deck, and another lesson in value are Nyxborn Rollicker, and Nyxborn Shieldmate. Another 2 power for one mana is Rakdos Cackler, not very thematic but fits for power and colour. Then there is the boss of weenie, the awesome top man himself, the Selfless Cathar! So much love for him. He's a great card for new players to play and learn with.

When building a deck that is going wide then Akroan Hoplite can get big. Not all that exciting but Cerodon Yearling is fast at least. Teaching about value and the dangers of going wide, you can have cards that go tall such as Sunhome Guildmage, and Truefire Paladin a bit as well.

If the deck has some boosts then Iroas's Champion is cool, or another fast card with Skyknight Legionnaire

I'm not excited by the enchantments you have, I'd rather individual ones that can boost them over cards that have little effect, or are defensive such as Brave the Sands. Just go aggressive with things such as Ordeal of Purphoros, and Madcap Skills. Swap the three mana Fervor for the awesome Expedite. It does what you need by not slowing you down later on, it allows you to run fewer lands (curving at two or with a few three drops I'd be happy with 20 lands), and it doesn't cost you a card. If you were spending more on it then Legion's Initiative is all sorts of awesome.

Just a few things to think about.

Had a look at other things which may suit this deck. Goblin Glory Chaser isn't exactly awesome but menace is decent enough. Monastery Swiftspear may be useful if you cast a spell or two. Nyxborn Rollicker is decent for a pump and survives if Enchanted creature dies (still costs a huuuge 2 to be bestowed though and not that good on it's own). Reckless Waif  Flip gets bigger but in my experience Werewolves aren't exactly reliable. Skin Invasion  Flip looks interesting but requires a creature's death, which seems bad at first but if you put it onto Vexing Devil...

Well that's the Red cards with a CMC of 1. May look at Green and White laters.

Had a look at other things which may suit this deck. Goblin Glory Chaser isn't exactly awesome but menace is decent enough. Monastery Swiftspear may be useful if you cast a spell or two. Nyxborn Rollicker is decent for a pump and survives if Enchanted creature dies (still costs a huuuge 2 to be bestowed though and not that good on it's own). Reckless Waif  Flip gets bigger but in my experience Werewolves aren't exactly reliable. Skin Invasion  Flip looks interesting but requires a creature'd death, which seems bad at first but if you put it onto Vexing Devil...

Well that's the Red cards with a CMC of 1. May look at Green and White laters.