Each land card in your hand has cycling .

Tectonic Reformation occurrence in decks from the last year 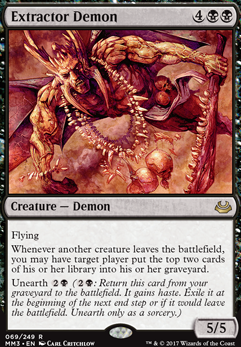 First of all, I do think it is handy to have some sort of equipment in my deck to keep my girl Carah alive, like Darksteel Plate or Hammer of Nazahn.

And you might not want to play too much storm, but I do play an Ignite Memories for the lulz and it is so much fun to play with a Possibility Storm. If you have one and you don't know where to play it... this is the deck.

I also like to play some grave retrieval aswell so when I am in topdeck mode. There is not a whole lot of stuff to retrieve anything that aren't instants, sorceries and artifacts with so I have a copy of Underworld Breach and also Past in Flames, since you can cast it in the late game from the graveyard, even if you had it miss on one of your exiles.

And Fiery Emancipation, its a high cost card, but everyone is about to get nuked the nest turn, and maybe even that same turn if you have Neheb, the Eternal with you.

1) ok, i switched it from Arbor Elf to Chrome Mox. my biggest issue rn is that a lot of the mana dorks produce green and it has slowd me down a turn.

2) i really only have 34 lands as 3 of them arnt actually used as lands Glacial Chasm, Maze of Ith, Malakir Rebirth Â Flip.

3) i do need better tutors, Diabolic Tutor cost way 2 much, even though this deck produces a stupid amount of mana.

4) regarding cards like Tectonic Reformation id rather have more tutors.

Thank you for your time and reply Xenephrim!

Hopefully I'm not misunderstanding the text of the cards, but the game plan with Fires of Invention was to have Chromatic Orrery for the red mana to cycle my lands with Tectonic Reformation. As far as I know cycling isn't a "spell" but an ability. So I can cycle cards in my hand as many times as I have mana for, then look for two big cost spells and play those, all the while having my commander or Psychosis Crawler on the board to try and cycle 10+ cards in one turn. Then swing in with 10+ commander damage. This was the reason for the tutors. I understand this is a lot of cards to find for a win-con but I'm pretty new to this.

Also, I agree with your opinion on tax cards. I think I'll gladly pull the Lightning Rift and the Drake Haven, but I'm going to keep the Hoofprints of the Stag only because my group's meta runs an absurd amount of board wipes and I want the option to rebuild.

Ok, first thing I'd recommend is get Tectonic Reformation in there for some card draw.

With all the rituals and Neheb in the deck, you might have mana to pay for multiple activations of Sword of the Paruns equipped onto Walking Atlas. Then you just have to get lands in your hand.

You already have a Crucible in here, maybe Tectonic Reformation could be an option for your draw smoothing? It certainly seems to be on point in terms of flavor. And maybe you'd also be interested in Drownyard Temple, you can use it once with Reformation, but multiple times with a little card called Arcane Spyglass.

And since this is a landfall deck, I just have to suggest Seer's Sundial instead of one of the loot sorceries :)

I look forward to hearing your thoughts on the modified build once it has had some run. I donât play my Ib deck as often as I would like because it can be overpowered for my playgroup. The few times I have played Tectonic Reformation I didnât get any value off it. Knowing itâs not just me, I probably have something else Iâd like to try.

I havenât tried Deflecting Swat in Ib but where I have played it, I have found it useful. Like Wild Ricochet, the usefulness depends on what your opponents do.

Thanks for sharing the update.