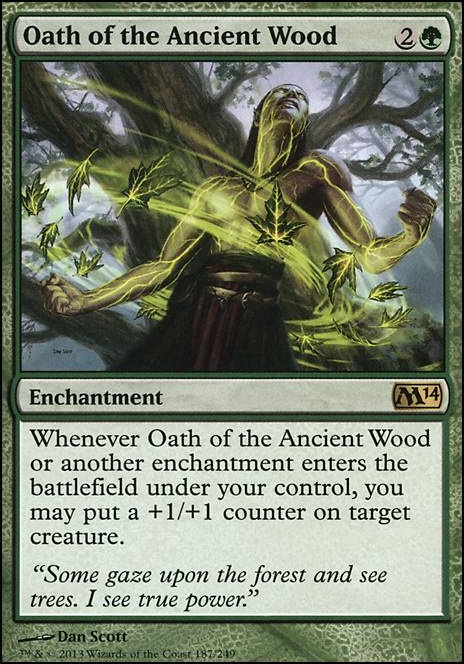 Oath of the Ancient Wood

Whenever Oath of the Ancient Wood or another enchantment enters the battlefield under your control, you may put a +1/+1 counter on target creature.

Oath of the Ancient Wood Discussion

Some cards to take advantage of the tokens: Earthcraft / Cryptolith Rite , Aura Shards

( Season of Growth is an enchantress for Auras that targets your own stuff, idk if there's enough room for it tho)

Have Spectra Ward & Krond the Dawn-Clad payed of for you? They seem expensive relative to their power

Oath of the Ancient Wood

Benefaction of Rhonas is a slightly better Kruphix's Insight- I'd consider running both.

There are some interesting tools in the monogreen enchantment toolbox- Asceticism is undoubtably my favourite, but you might like Bow of Nylea Crop Sigil, Rancor, Cream of the Crop, Wreath of Geists, Oath of the Ancient Wood,

Impromptu Raid/Call of the Wild are an interesting pairing for mono-green ramp lists, but rarely run well.

I reccomend focussing a little on ramping into higher cost cards- 5 drops are a lot less expensive money-wise than 4 drops in modern, and a lot of them are game changing- a well placed Plow Under or Primal Command, stacking up a Gigantiform, Gutter Grime, Lost in the Woods etc.

From your description in the EDH forum thread it sounds like your group isn't playing enough mass disruption to break up board states. Your commander is indestructible, less than a fifth of your deck is creatures and only half of them really matter beyond ETBs, you're set up to play wrath heavy. Wrath of God, Austere Command, Winds of Rath, Day of Judgment, and Rout are crazy efficient in multiplayer. In you have enough answers to spot-exile/disenchant problem targets that you don't need to crack yourself with more broad/powerful wipes like Hour of Devastation or Hallowed Burial.

I know wraths are scary when you're coming from another format, but this is multiplayer against decks built to go long and you control when/if you play them. Quarantine Field would cost to hit a single target for each of 3 players, Wrath hits every single one of their creatures for half that and gets around shroud/hexproof.

Beyond that, here's some suggestions for threats and cuts. There's a lot so I'll hold back on justifying them unless asked.

That's a lot of words, I hope you find some of them helpful!

A few of these cards aren't from Theros. Here are a few replacements:

Temple of Plenty instead of Sunpetal Grove

Silent Sentinel instead of Sun Titan