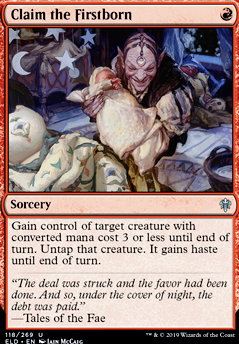 Izzet blitz? yes it is! (budget)

General comments: I'd say you have too many creatures, not enough instants. Also, a lot of the creatures you chose are kind of slow.

Creatures: You need 4x Monastery Swiftspear. Losing Soul-Scar Mage definitely hurts but his price is pretty ridiculous. Delver of Secrets Â Flip is kinda slow. You're never going to cast Niv-Mizzet, Parun, just cut it. Not sure why Fanatical Firebrand is here.

Curious Obsession is better than Curiosity since you want to be swinging every turn anyways.

You don't have DRC so I'd run Consider over Thought Scour.

Vexing Devil is a deceptively bad card in burn: your opponent will always choose the option that's worse for you. Early game they will remove it, late game they will just let you keep the creature.

For the creature suite, I recommend:

Goblin Guide: Does almost as much damage as the elementals in one turn, and then keeps swinging each turn after that. Giving opponents possible card advantage doesn't matter when you're going to be ending the game by turn 3.

Monastery Swiftspear: Has the potential to do even more damage than Guide, given that we want to be slinging as many burn spells as we can each turn.

Eidolon of the Great Revel: It hurts us a lot, but it probably hurts our opponent more. Even if they try to remove it (which they usually do) they take 2 damage anyways.

add maybe 1 Sacred Foundry for 2 Wear / Tear in the SB since you have so many fetches. Also maybe run 3 Skullcrack

Some other budget-ish options include Grim Lavamancer since you have soooo many fetches and Monastery Swiftspear to proc off of the spells your casting. Cut the Elementals for the lavamancer and Swiftspears. Maybe some Goblin Guide if you can afford them.

And I'm assuming b/c you have fetches you could maybe run a few other things maybe Ragavan, Nimble Pilferer?

Some non-budget hits include Leyline of Punishment and Blood Moon.

coleslaughter i think for right now to help keep the deck under budget i'll run Monastery Swiftspear but i have seen a few other builds with Soul-Scar Mage and if i ever add to this deck later on i will definitely consider it !

i'll rework the maindeck and sideboard now with all of this in mind. thanks again to both you and Barbarian_Sun_Pope for all of the advice, it really has helped !

Another suggestion is Soul-Scar Mage instead of Monastery Swiftspear. Its trade off is haste vs poisonless infect. Its a large tradeoff, but it might be worth it.