Whenever Kaalia of the Vast attacks an opponent, you may put an Angel, Demon or Dragon creature card from your hand onto the battlefield tapped and attacking that opponent. Hard-casting a 6/6 for 7mv that tutors ETB is not a good tradeoff, although it does technically qualify him as a cantrip which is absolutely hilarious.

In short, he's an excellent combo piece but a terrible stand-alone choice. In the right deck, such as Kaalia of the Vast or in a deck that maybe runs Sneak Attack, he works wonderfully.

If you're not against swapping the commander, I personally think Kaalia of the Vast is a better tribal angel commander, as while very similar to Mayael the Anima with cheating creatures into play, her ability does not cost mana to activate.

From the New Capenna set, Giada, Font of Hope is a must add. She's a mana dork for angels and acts as an anthem-effect by putting a +1/+1 counter on your angels whenever they ETB.

I'll comment more stuff later when I have time.

AstroAA on Who is Your Favorite Tribal â¦

I've had several tribal decks in my life, namely being:

Brimaz, King of Oreskos tribal soldier. Many of the decks using him as the commander I've seen use him as a tribal cat general, but I think the soldier tribe fits him better because you can use anthem effects like Field Marshal, Auriok Steelshaper, and Knight-Captain of Eos to greater effect. I turned the deck into Adeline, Resplendent Cathar tribal humans/anthems, because I think she's a simply better Brimaz at being more aggressive.

Lyra Dawnbringer tribal angel. Angels are my favorite creature type in Magic, and I think she's easily the best general for the archetype outside of maybe Kaalia of the Vast. It wasn't very good, and I eventually took it apart because I never played it.

Celestial Kirin tribal boardwipe. It's technically tribal spirits, but I like to call it tribal boardwipe because it basically turns every spirit into a boardwipe. I built it on a $50 budget, so it's very unoptimized and pretty slow, but it's still fun to play in a more slower-paced setting. I still have it, and play it when my group does budget games.

Oona, Queen of the Fae tribal faerie. I built this deck to be more of a hybrid combo/tribal faerie deck, and it slaps. It's not as good as optimized Oona combo lists, but it still wins games. I still have it built.

If you couldn't tell I really like mono-white tribal decks.

Wuzibo on Who are the Commanders you â¦

I've only ever fielded 3 commander decks: Yisan, the Wanderer Bard, Daretti, Scrap Savant and Kaalia of the Vast.

Yisan was generally well received though.

People didn't have a problem with daretti himself. They didn't like the "winter orb, obliterate, crawlspace" strat i did to get my board set up to something i can win with. The difference between this and Kaalia, though, is that people hate kaalia as soon as they see her. People don't hate daretti till he pulls off shenanigans.

Personally, the commander i hated going against the most was probably that blue guy that makes you draw whenever their controller draws. I get to draw my deck in ten turns, but i can't play anything besides lands and mana rocks.

Marath, Will of the Wild is a commander i remember going against fondly. Felt fair enough.

I personally don't think Kaalia of the Vast really fits, even though she has an attack trigger. Currently, about 6 of your 34 creatures are either an Angel, Dragon, or Demon. The likelihood of her getting some of those out of your hand is currently kind of slim.

You could stand to run a bit more ramp; your average CMC is kinda hefty for the amount of ramp and lands you're currently running. That's just my personal preference. Your deck is also pretty light on Draw effects, so far I'm counting 3 (Skullclamp, Esper Sentinel, and Phyrexian Arena), maybe 4 if we count Bolas's Citadel.

Although you have a lot of good and splashy creatures, not all of them necessarily fit well in this deck, and could be cut to add some more ramp, draw, and maybe 1-2 more pieces of removal.

Until end of turn, all Food tokens are no longer artifacts, and become 0/1 creatures with "This creature gets +1/+1 for each other Food on the battlefield."

Make a new Kaalia (Kaalia of the Vast, Kaalia, Zenith Seeker), or make a card that is similar to her flavor-wise (though not necessarily mechanically). 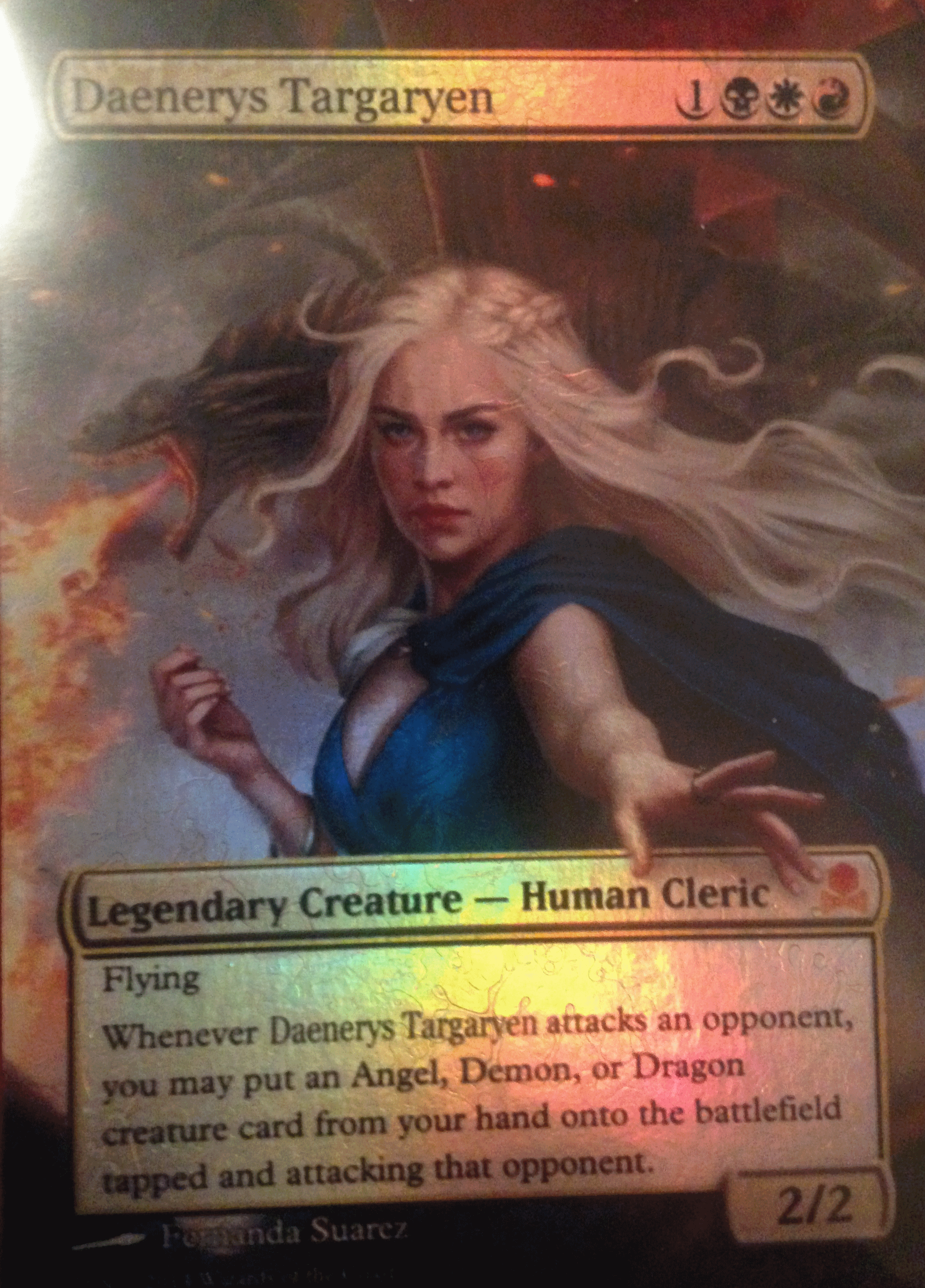 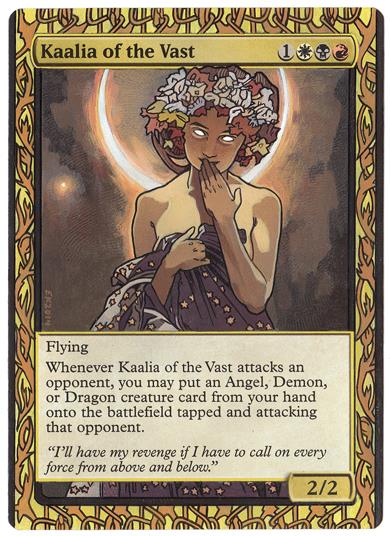 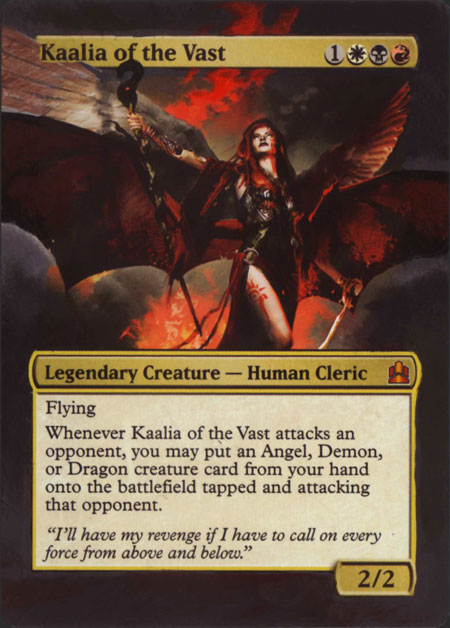 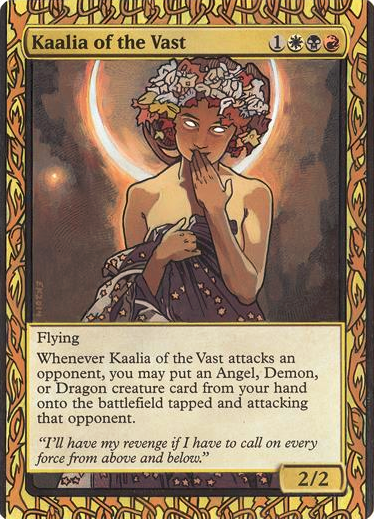 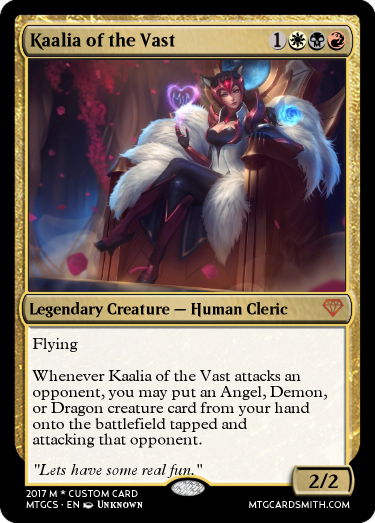 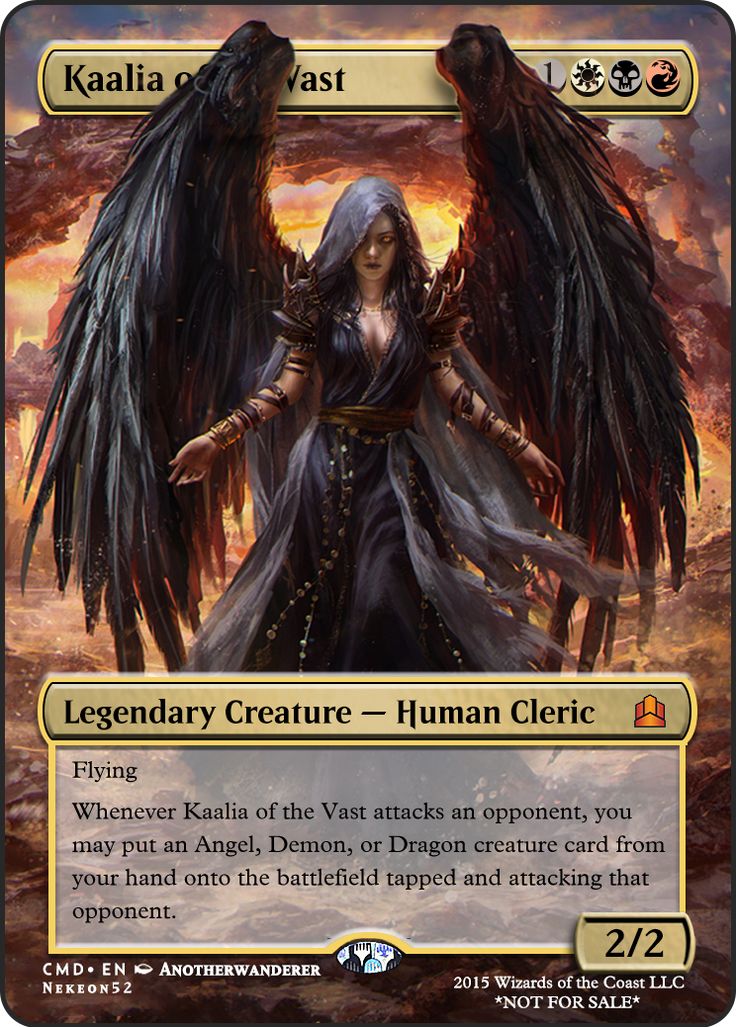 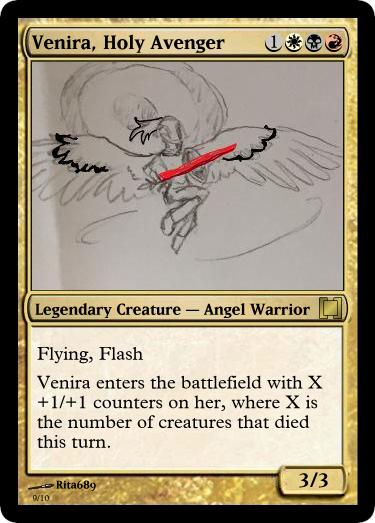 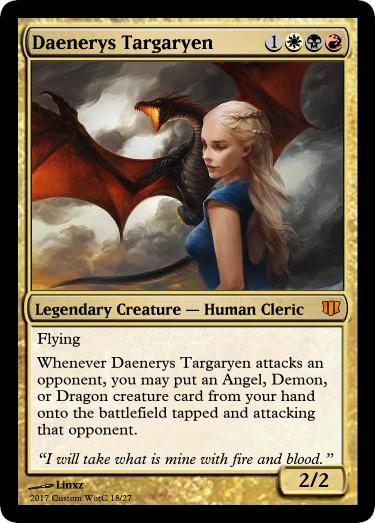 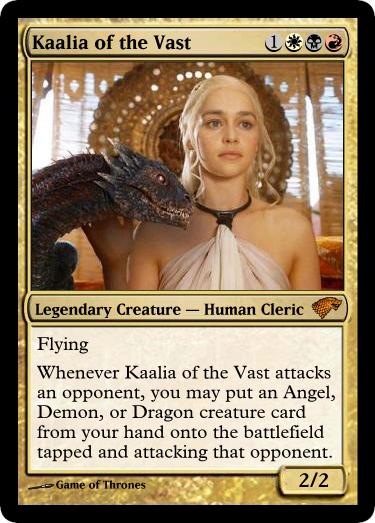 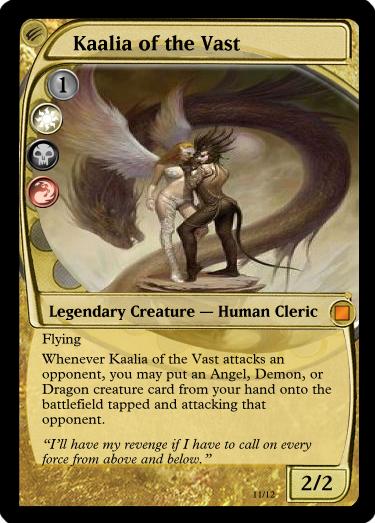