Momentary Blink occurrence in decks from the last year 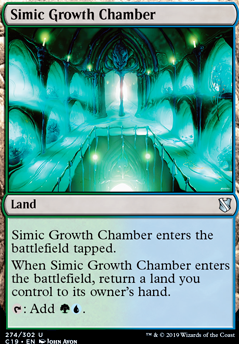 Now you see it, now you don't.
by SatisfactionDay

Ghave, Guru of Life and Death

Seems pretty solid- a nice mixture between fair Ghave with loads of combo backup. I can safely recommend Pattern of Rebirth for the deck- it's a solid way to find Razaketh, Mikaeus, or Woodfall Primus for a much lower cost.

Quick note about the Yawgmoth combo with Undying creatures- you need both Geralf's Messenger and Young Wolf in order for Yawgmoth to reset the Undying creature's +1/+1 counter. This is because Yawgmoth's ability requires a target.

So if you have just Young Wolf and sacrifice it to Yawgmoth, you can target Young Wolf with the -1/-1 counter ability, sure. However, due to the sacrifice and Undying trigger, the Young Wolf that comes back into the battlefield will not be the same one as the one that was targeted, so no -1/-1 counter will be placed. This is the same reason that, if you target someone's creature with Assassin's Trophy and they respond with Momentary Blink, your Trophy will do nothing: Because the creature targeted left play and the creature that entered is a new instance of that creature (so the creature targeted is no longer a valid target).

Outside of that, everything looks reasonably solid. Here's the list I play: Ghave: Baby Makin' and Alimony. I like the reanimation package; I'm currently on Hulk because why not but the reanimation might work better during more drawn out games.

Cauldron of Souls doesn't do any infinite persist combo without a way to untap it.

When a permanent changes zones (IE, is moved from the battlefield to the graveyard) it is a new instance of permanent, and has no memory of its previous state- the game uses last known information to even know it has persist. As a general rule of thumb, counters, abilities granted until end of turn, etc., tend to go away if a creature dies/comes back or is blinked/flickered (my favorite example being if you were to cast Brave the Elements naming black then Momentary Blink your Figure of Destiny later in the turn for whatever reason, your Figure would come back as a 1/1 no matter how many level counters were on it previous and would not have protection from black).

"If a nontoken creature that gains persist this way is put into a graveyard, that card will be returned to the battlefield with a -1/-1 counter on it. However, because itâs a new object with no relation to its previous existence, the returned creature will not have persist."

Momentary Blink is good if you accidentally mill most of your blink cards, though it costs a lot of mana i would add 1 or 2 only to trigger the Eternal Witness. I think you should add 1 or 2 Genesis for creatures retrieval if you dont get any eternal witness or unburial rites, think that milling yourself can kill most cards. genesis is a good way of "resurrecting" them you may "kill" the cards that can reanimate your creatures, and retrieving an eternal witness will help the cycle of the deck having less issues. It is good if your deck get stuck. You can try some dredge cards like Stinkweed Imp , kinda impossible to kill without exiling effects, mills almost for free(so you can reanimate more cards) and also flying and "deathtouch" will stall the game against most big creatures. I think Genesis and the imp is a must here