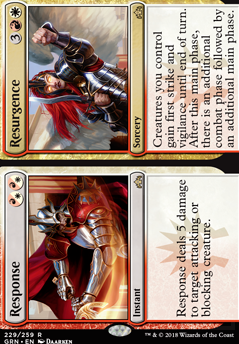 Response / Resurgence occurrence in decks from the last year

Avacyn, the Mad Angel
by TheBooman

Samus_Saran on Fury of the Horde with ...

Can I remove alone Response / Resurgence to cast Fury of the Horde rather then remove 2 Cards, because this Cards contains 2 Cards in one?

You can use double square brackets around a card's name to create a reference link: Relentless Assault, Reverberate, Repeated Reverberation. It's the easiest way to make sure everyone understands what's going on in your question.

The extra combat phases created by the copies will mostly be wasted. Relentless Assault and most other similar spells only untap the creatures at the time the spell resolves. If you make copies of it, any creatures that attack during one of the additional combats will still be tapped when the next one starts.

You can get around this by either using creatures with vigilance or using a spell that works in a slightly different way. The two examples I found are the "Resurgence" half of Response / Resurgence, which gives your creatures vigilance as part of its effect, and World at War, which specifically untaps your attackers at the beginning of the additional combat phase.

One more card design idea. What if you made it a split card. Like. Response / Resurgence this might help with the wording.

BaneOfLordran The Ox is a bit out of place. He's only here because he's good and I might need card advantage. He's on the bubble though. I thought about replacing him with Underworld Breach