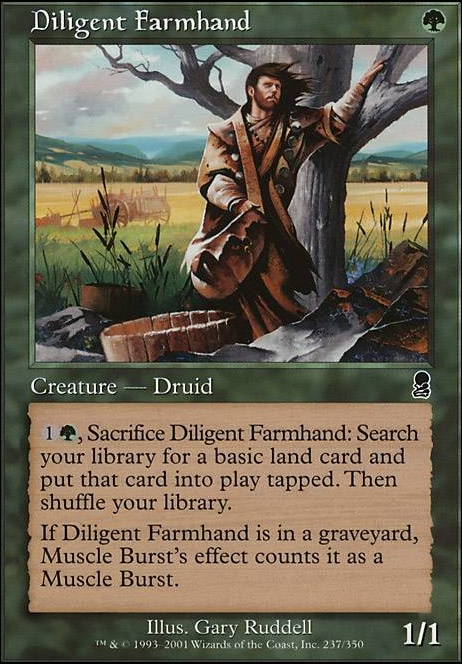 (1)(Green), Sacrifice Diligent Farmhand: Search your library for a basic land card and put that card into play tapped. Then shuffle your library.

If Diligent Farmhand is in a graveyard, Muscle Burst's effect counts it as a card named Muscle Burst.

Diligent Farmhand occurrence in decks from the last year

The new Brash Taunter works well as the nasty french men. I have been planning on doing some alters to a deck that I am building that is very similar. Using Kenrith, the Returned King as my commander. Some other cards that I found:

If you're still looking for more ramp, Perilous Forays is a favorite of mine that also synergizes with what your deck is planning to do. Not sure how it stacks up against your other sac outlets but might be worth a go. Diligent Farmhand isn't quite as good as Sakura-Tribe but may still be worth an inclusion

I like the addition of Oko in here as an annoyance who can just keep coming back. I also didn't know Gravebreaker Lamia had that second ability, so I'm going to have to add it to my Muldroth deck right away!

I notice you run several more spells. I understand the counterspells as necessary interaction, but some of the others might be able to be replaced by recurrable (if slightly less efficient) permanents.

With Atris, Oracle of Half-Truths you can get a mini-Fact or Fiction that you can recur each turn.

I also like to run permanent-based ramp like Diligent Farmhand and Springbloom Druid over spells like Farseek since they offer a chance to be reused once Muldrotha comes out.