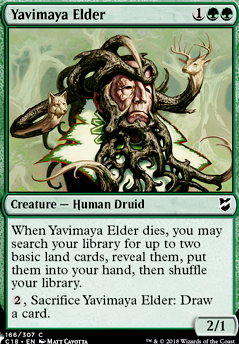 When Yavimaya Elder is put into the graveyard from the battlefield, you may search your library for up to two basic land cards, reveal them, and put them into your hand. If you do, shuffle your library.

Yavimaya Elder occurrence in decks from the last year

Slimefoot, the Stowaway
by bushido_man96

Maybe these are a little too small-time for your tastes, but I think that having a few more cards like Yavimaya Elder, Bloodghast and even Mitotic Slime around would ensure you always have ideal sacrifice fodder for Vaevictis's ability. If you go deep enough, they can also be plugged into things like Attrition as another option.

Dire Woe to the Vanquished

Hey Coward_Token! I think my deck is at a good place now, I rarely run into problems with it. There's definitely more room for tweaking, especially with new cards coming out! Bonders' Enclave, Nylea, Keen-Eyed, The Great Henge, Kogla, the Titan Ape are some of the new additions.

For me Yavimaya Elder isn't fodder for Vaevictis, he's just permanent based ramp with some incidental value with other cards such as Meren of Clan Nel Toth, Harvester of Souls and Korvold, Fae-Cursed King.

I've considered some that you might be interested in as well, Robber of the Rich could be worth trying out, it has plenty of potential to be good both in early game and late game! Mind Stone comes to mind as well. ;)

Dire Woe to the Vanquished

Wihito: 'sup, how has your deck been doing? I've tried to tone down the CMC of my own deck to make it a bit more consistent, esp. with those ritual-esque permanents. Do feel I have a bit too little early card draw to hit land drops consistently, so I'm thinking of fitting in Yavimaya Elder even though I don't like that you'll miss out on the draw if you sac it to Vae. Any thoughts on such early game concerns?