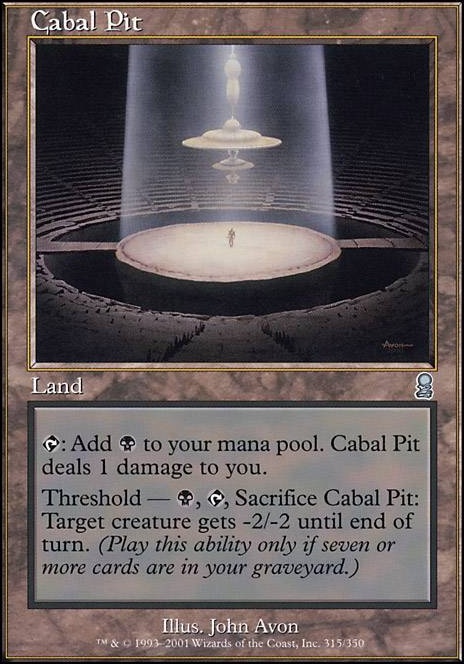 Threshold Â {{B}}, Tap, Sacrifice Cabal Pit: Target creature gets -2/-2 until end of turn. Activate this ability only if seven or more cards are in your graveyard.

Cabal Pit occurrence in decks from the last year

Frog and Toad Are Friends
by cyrusthelin

Riku but with no red
by Jpl__

Tiny Tim Tiptoes Through The Salt Mine
by cardboard_bob 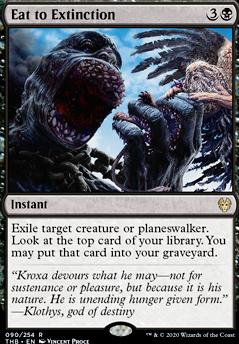 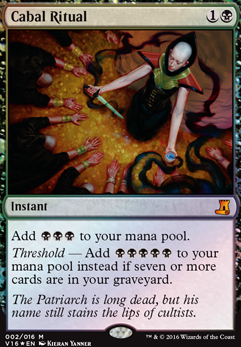 To a lot of decks its still the wincon. Rest in Peace, Grafdigger's Cage and Planar Void is powerful enough to stop it consistently, but it shuts down my own deck's strategies. Instead I would run Nevermore naming Flash but I can't even run that tactic anymore. Lesser forms of graveyard hate such as Scavenging Ooze and Tormod's Crypt are not good enough as they can't prevent a dies trigger such as how Rest in Peace does.

In the event a Hulk player hard-casts Protean Hulk and then right after casts a spell like Diabolic Intent or Life's Legacy to sacrifice it as part of the cost the only way I could possibly see of disrupting that at instant speed in non-blue is through Aven Mindcensor. I know the Aven is typically good in EDH, but it doesn't nearly answer as many combos as Pyroblast does nor can I run a second copy of it nor cast it for one mana.

Hulk isn't so bad of a problem that it needs to be completely banned either. The issue is any hulk pile with Grand Abolisher or Thassa's Oracle is just too difficult to stop at all. Grand Abolisher requires you to run super narrow cards you wouldn't run anywhere else like Ghost-Lit Raider and Cabal Pit just to get around it and Thassa's Oracle requires answers in blue like Stifle to stop it or Torpor Orb which will be a magnet for removal for everyone playing at the table.

Arcane Signet is a strict upgrade over Fellwar Stone . Iâve also been trying to run Urborg , Vault of Whispers , Cabal Pit , etc. and other come into play black lands plus 1 snow covered swamp to make tainted pack for sure get what you need. I also like Fire Covenant and Phyrexian Purge over Toxic Deluge . They both dodge your Grenzo and kill problematic hate bears. They both imprint on chrome mox for red and black which comes up a bit when itâs a race to combo.

You're running too many basics to be doing the Hermit Druid thing. Try adding in stuff like the artifact lands, Pendelhaven , Centaur Garden , Cabal Pit , so that the Druid will consistently mill a decent amount. I'd honestly say try to get your basics down to 5 or less, which is admittedly hard in a 2-color deck, but it'll be worth it.

StopShot on engine out, painters servant in

Protean Hulk or Grand Abolisher - either one of those I would have banned. If my best answer to a combo is Cabal Pit or Ghost-Lit Raider 's channel ability something has gone wrong. If better answers were printed to get around this combo *cough* Grand Abolisher *cough* then it wouldn't be as bad.

Lastly I would have banned Dakmor Salvage . The infinite combo with this card, a discard outlet, and The Gitrog Monster is like the love child between Modern KCI and Legacy Four Horsemen. The casuals in my playgroup don't even want to bother understanding the inter-complexities that go behind this combo because there is a lot to take in, especially when the Gitrog player uses their discard step as a discard outlet to win the game. (Yes, I understand Gitrog players can use their discard step as a repeatable method to cycle Dakmor Salvage .) The issue here is, if no one can or wants to fully understand all the rules and limits that go behind this strategy that means only the Gitrog player is responsible for checking to see if the Gitrog player is following the rules behind his combo or not. The point is unless I'm there this player gets away with winning games a judge would have tossed the book at him for, because he knows his opponents won't challenge him on the validity of his reasoning. (Even I'm not fully knowledgeable on it myself either; I just have a better general understanding.) Seeing it get played in my casual play group is just too painful to watch and no one wants to make a play-group ban or else said player is going to feel singled out which would create bad blood amongst players. Either way this one combo has been disbanding my play group and nobody really wants to play the game as much given the stigma of the combo. I have even given up building my deck to go up against theirs as it would require boarding in cards that would already set my own deck back like Rest in Peace , Cursed Totem , and Suppression Field .

Contamination and Flash-Hulk combo are a pain to deal with, but I feel like I can still somewhat interact with them with cards like Seal of Cleansing and Red Elemental Blast . It's just those strategies feel like they run against the spirit of the game and are just too harsh to deal with as it currently stands. The Gitrog-Dakmor Salvage combo however, is the only strategy I feel incredibly helpless against that is crushing my interest in playing this format. I don't think these cards will ever get banned however, because they're either too obscure for most casual players to use often enough and/or they demand a player to own a lot of monetarily expensive cards in order to use them consistently and fast. Contamination , Infernal Darkness , Grand Abolisher , and Dakmor Salvage are the cards I feel need to banned the most given their impact when utilized in decks that can use them optimally.

I've been brewing with this guy myself, and couldn't help but notice that Ancient Tomb was absent from your mana base. Also, I would highly recommend Ifnir Deadlands over Mana Confluence for the purpose you're using it, as well as Cabal Pit or Tomb of Urami over City of Brass for the same reason.

Of course, most of these are worse than swamps, but they turn Tainted Pact on