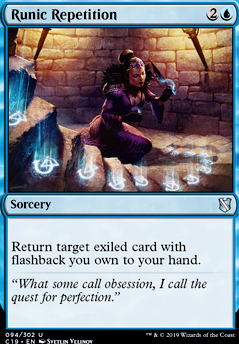 Return target exiled card with flashback you own to your hand. 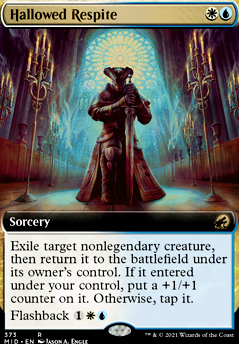 RambIe on Omniscience or Cyclonic Rift?

Normally Omniscience vs Cyclonic Rift Rift would be the easy choice, however with your deck i think Omniscience would be the better choice
1st Narset, Enlightened Master triggered ability science would be a perfect hit while rift would be a complete wiff
2nd science interacts with 12 other key cards in your deck that , so based on the cards you have chosen for this deck science would be the "win more" card
off topic
I'm surprised not to see any unblock able or extra combats cards, i would advise Echo of Eons , Mystic Retrieval , & Runic Repetition so that you can consistently reset your library if you do go into an infinite turns loop

Thought Reflection - Rhystic Study
Etherium-Horn Sorcerer - Runaway Steam-Kin
(most the cards in this deck would be a wiff on cascade trigger)
Swarm Intelligence - Echo of Eons
(swarm is a cool card but cmc way to high, echo will give you a way to reset your deck, also protection from mil)
Izzet Boilerworks - Runic Repetition
(to many lands / deck doesn't utilize bounce, runic will combo with Mystic Retrieval to loop any spell in the deck)
Thousand-Year Storm - Mindmoil
(storm is cool but once you start looping it will just cause you to loose focus and likely miss play, moil works with the current synergy your using)
Swiftwater Cliffs - Primal Amulet Â Flip