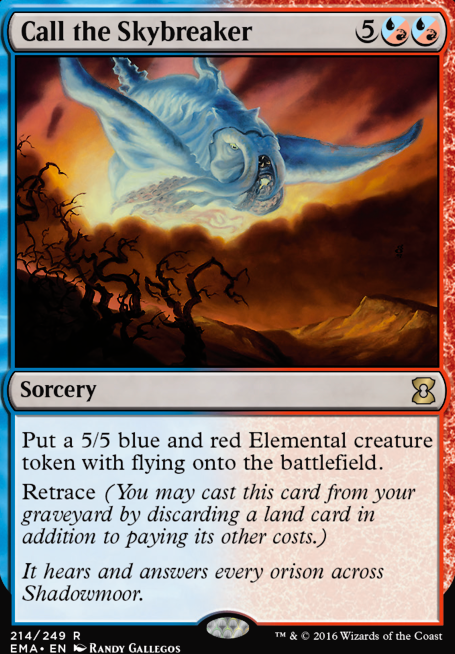 Put a 5/5 blue and red Elemental creature token with flying into play.

Call the Skybreaker occurrence in decks from the last year

Roll and the Rockman
by Tekkahedron

This is your chance to run Call the Skybreaker ! Maybe switch it in for, let's say, Cyclonic Rift ?

You might appreciate Call the Skybreaker as a big, no-frills token in your colours? It also gives you something nice to do with excess land in the lategame. On the other side of things, Elemental Mastery is another way to guarantee plenty of tokens to transform.

Seems like a pretty decently put together deck! Looks like its wincon is, "Generate a butt ton of mana, then fork a huge burn spell"

One thing I will say is that your "Board Presence" category is pretty lacking. Board presence in general will be a hard thing for Mizzix to achieve, and, other than an early Talarand sticking or a big Clone Legion, you don't really have much. Again, board presence isn't even like a secondary goal of a typical Mizzix deck, but if you want some, try running Young Pyromancer for a weaker, but earlier token generator. Also, I run Call the Skybreaker. It gives a 5/5 flyer for 7 mana which and be cast again and again by discarding land and is also a great way to push experience counters. Also look into Rite of Replication.

I'd run Evacuation instead of Crush of Tentacles as it is one less mana and an 8/8 doesn't really help advance your wincon.

As for your ramp/rituals. I think you are running a couple too many rituals. The problem is that you have all those rituals and nothing really to use it on. And with the amount of tutors you have, I think it is resonable that you cut a couple of your combo pieces in favor or some other tricks that your deck isn't currently doing, since you can get your combo reliably as well. I'd take out Mana Flare, as it gives a good amount of benefit to your opponents whilst you should be getting your vast amount of many other ways. And It'd also take out Commander's Sphere in favor of just another draw spell.

Anyway, looks like a great likes that is pretty cheap to make as well. I have my Mizzix on my page and would love to talk more about it because she is my favorite commander :))

Lord of the tokens

This looks really cool! Even though Brudiclad, Telchor Engineer seems like a rather single-purpose commander, albeit a strong one at that, this list looks totally different than mine. Mine is probably a lot more aggressively themed, but it's still cool to compare and contrast. Give it a look, it's My Myr Merriment.

Also, I strongly suggest Chronozoa, as it combos really well with Brudi. If you turn other tokens into copies of it, they haven't entered they just transformed, so they don't have any counters and they all double.

I would also suggest stuff like Desolation Twin, Utvara Hellkite, Call the Skybreaker, or Phyrexian Processor to create huge tokens that you can copy onto a bunch of others.

It's always cool to see similar decks and compare/contrast, but playtesting is really the best way to improve. Good luck!

Brudiclad, The reason to return to New Phyrexia

I feel Call the Skybreaker is too expensive for what itâs doing. 7 mana for a 5/5 flying token when you already have large token generation and copy effects, Iâd rather put in card draw or removal.

Brudiclad, The reason to return to New Phyrexia

We seem to be playing different versions of the deck, which is understandable. A lot of the cards you suggest are above my budget, and you suggest cutting cards that I specifically mention in my description that are pet cards of mine. I built the deck so I could play all the awesome U/R spells that would never work in Modern.

You keep saying I donât care about tokens but I do, Iâve built the deck around them. Young Pyromancer, Talrand, Sky Summoner, and Dragonshift being my wincons. And Call the Skybreaker is another of my wincons. It gets rid of the many excess lands I have from drawing so many cards and turns them into threats. You donât need other wizards to make Docent of Perfection  Flip good, itâs great on its own and is very easy to flip.

Iâve also tried counterspells in the deck and they were bad in my experience, I rarely ever hold up mana for them and hitting them on Epic Experiment feels really bad. My playgroup also stays away from extra turn spells because turns end up taking so long. I already have Blue Sun's Zenith in the deck. Iâm also aware that Baral is better than Electromancer but with so few counterspells there isnât much difference, Iâll upgrade it eventually.

Torrential Gearhulk could be good in the deck, but I donât own one and I do own Snapcaster Mage for my Modern deck but I could see running both.

Thanks for the suggestions and comments! Hope I didnât sound rude, I really do appreciate it but youâre suggesting cutting most of my favorite cards in the deck.