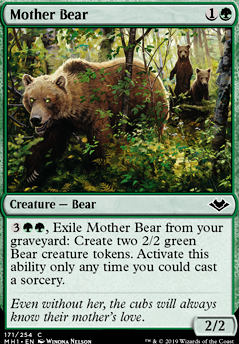 , Exile Mother Bear from your graveyard: Create two 2/2 green Bear creature tokens. Activate this ability only at any time you could cast a sorcery. Nah man, Food Chain Ayula is a tier 0 deck, being mono-green it is impossible that it doesn't hit 200 mana turn one, and all of that mana being green allowing you to cast Food Chain and Bear-ternal Scourge to cast Ayula and infinitely pump it, fighting all opponents, getting infinite mana to dump into the Walking Ballista that was fetched with your signature spell; Enter the Bearfinite, which draws your whole bear deck and places it onto the field, giving you no maximum bear size.

This deck also has Veil of Summer as its second signature spell for the partner bearmander, Yeva, in bear mode. This means since you have 2,000 mana turn zero you can flash in all of your bears and protect them from 0 mana countermagic.

Now that you have your bears, infinitely large everything and 20,000 mana turn negative one you can then cast Mother Bear to loop it with Bearshnod's Altar and Pull from bear-ternity, to gain infinitely more bears, infinitely pumping them all with your infinitly big Ayula.

Turn negative infinity, instant 100% win. Even has a 100% winrate in the mirror.


this is a lot of cards, and more are sure to come out that I want to include. I'm considering making a modern cube in addition to my legacy cube, or maybe expanding the cube altogether. I really don't want to go to 720, and honestly I would prefer 360 with a regular rotation of cards, but I don't play the cube often enough to justify that so for now it sticks to 720.

Hey I totally get it! Thatâs what i figured.

I kmow you are running a budget version here as of right now but here are a few more suggestions I thought of while taking another look at your list.

Another very contextual card choice could be Riftsweeper in order to bring something like Mother Bear back. Itâs super janky but kinda cool. Iâd personally run that over one of the other elves you are currently running. Iâd actually take all the elves out for better more tuned-up ramp like Harvest Season and Diligent Farmhand â Growing Rites of Itlimoc  Flip is great since you are running tokens but this is also a budget. Shamanic Revelation may be a good draw replacement for Elvish Visionary . I know cmcs are very different but I would put in bigger draw over a creature that gives draw one.