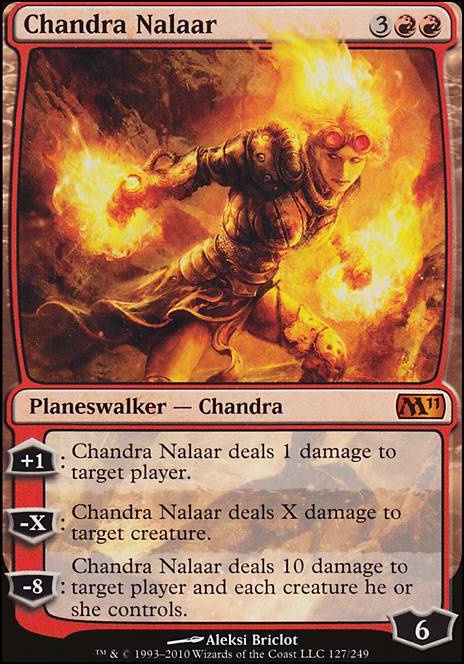 -8: Chandra Nalaar deals 10 damage to target player and each creature they control.

Revenge of the Legion
by tadman1996

Every Card Says "Chandra"
by Skillasaurus 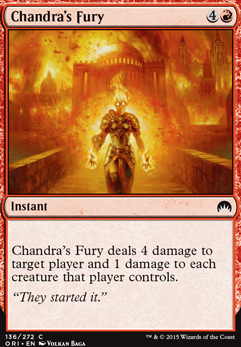 DarkHero on Will Xenagos Return in Zendikar?

That's a bit of a stretch. I'll admit I'm not 100% on the lore, but even if he survived, He gave up his Planeswalker abilities in pursuit of becoming a God. There wouldn't be any outward reason or way he could make it to Zendikar. A third return to Theros maybe, but not Zendikar.

That being said, there is no reason we couldn't see a return of Sarkhan Vol, a transition of Nissa Revane, Chandra Nalaar or Vivien Reid to Gruul colors, or even just a completely knew Gruul walker.

Rhadamanthus on What happens if I mutate ...

If you put the mutate creature card on top of the planeswalker then it will stay a creature after the turn ends. If you put it below then it will go back to being a planeswalker. Note that Sarkhan's ability will still apply, so until the turn ends it will still be a 4/4 dragon, regardless of the mutate card's characteristics. You'll be able to activate the loyalty abilities.

A "merged" creature (that's the official rules term for it) has the characteristics of whatever is on top of the pile plus the abilities of everything below it. That means if you put Pouncing Shoreshark on top of a Chandra Nalaar, it will be a 4/3 blue shark named "Pouncing Shoreshark" with the Shoreshark's abilities and all of Chandra's loyalty abilities, and if you put it below Chandra it will be a red (non-creature) planeswalker named "Chandra Nalaar" with all the loyalty abilities plus the Shoreshark's abilities.

legendofa on Chandra, the Elementalist?

I'm not sure she's really "creating life out of fire." Chandra's Spitfire and Chandra's Phoenix seems to be more like flames shaped into temporary recognizable forms, similar to (maybe just my interpretation of) Master of Waves 's tokens being water temporarily given form. Chandra was introduced in the Lorwyn block, but did she ever come into contact with flamekin?

@cdkime: & the Yin & Yang have met again (Yeah, I referred to you as one of those & me as the other. & I apologize for even that.)

Yeah, Those quotes were from that section of the franchise. Really hard to believe it's almost 9 (At least the anime first aired in Nippon in 2011.)

But, back to damn business. I was just showing what updates I plan to do in the future, although I think I already went too far on that; as per usual. Quite astounding I've yet to even upgrade my whole account; but the reasons why is almost like me believing Kiran Nalaar ("Deceased" Father to Chandra Nalaar ) might actually be alive, yet Chandra, staying back in Ravnica will never realize otherwise.

No really though, How good is Archidekt? If this hell keeps up from me, I'd have to use that for my stuff as a reserve. It's ironic I have standards w/ Morophon, the Boundless . Maybe I should place it somewhere else; I mean it's technically 5c; better make use w/ the whole damn Pie.

That said, I'm still grinding out on what I still have to make though here. & yes, I'm making that Vorthos Deck after nobody was able to notice that simple thing. & I'm going to upgrade myself for damn sure. When all depends of how well my dad's car will be fixed (Hey, family is important too! Don't be a fool & have all the audacity to oppose them.)

As for Morophon, I'll keep these rules in this post in case one still cares; you might as well do what you intended to do in the first place anyways:

As for the other quote, it was literally stated by the same Madoka Kaname as the other. But, at least you now know several other personality traits of mine: Stress in so much of my adult life, Introversion, low Self Esteem, But considering you still believe my current Mana Combo is , & a possible third of mine is , where does this all lead as a color identity of mine still I question where even your Azorius identity seems to always stay intact?

I'm Ponder ing this as I give you the right to edit whatever means necessary. Deadly interested in the NETFLIX Series coming soon though; even if The World disagrees...

I don't think a deck, that's both agressive and runs no more than 20 lands (and 65 cards, which I also don't recommend), wants to have 5 drops.

But if you do want 5 drops, I think you can do better than Chandra Nalaar and Malignus