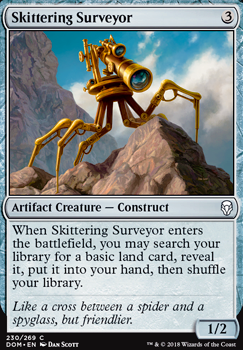 When Skittering Surveyor enters the battlefield, you may search your library for a basic land card, reveal it, put it into your hand, then shuffle your library.

Skittering Surveyor occurrence in decks from the last year 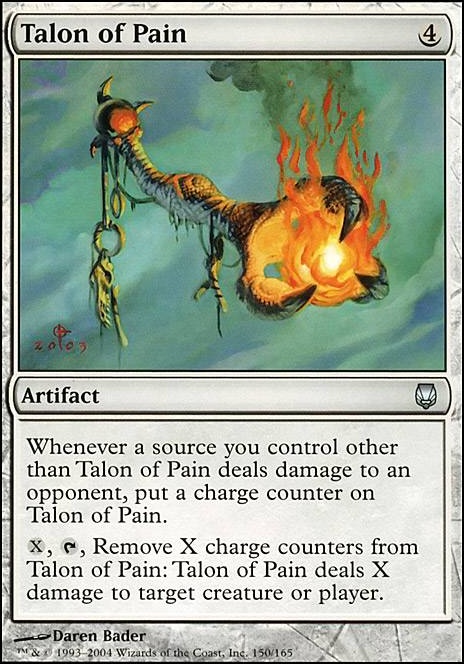 VAR0K, while Dragon Tempest is great in your opening hand, running only 2 of them isn't consistent enough. 4 would be optimal.

The fastest possible scenario you can have a dragon out is Turn 3, which is the same as my deck actually lol. The problem (in my opinion) with this deck is consistency. I can't stress this enough. You dragons are spread out so that you can't be sure what you'll draw. Glorybringer would be awesome here, replacing Skyship Stalker .

I would reduce differently named dragons, consolidating into 3-ofs and 4-ofs. Getting more big mana creatures out would be good too. If you cast Everflowing Chalice for 2 mana, that nets you one mana per turn, uncolored. Running Generator Servant or Satyr Hedonist both give you 2 mana for the same cmc, one of which enables haste. Gen Servant giving haste is a good piece of redundancy here, in case you can't get Dragon Tempest . Skittering Surveyor nets you 1 extra mana for a 3 cmc creature, which again can be replaced with Generator Servant or Satyr Hedonist .

Deflecting Palm is one of those cards that'll screw you no matter what lol! And yeah, Satyr Hedonist is an underrated gem in my opinion.

I hope I don't come off too antagonistic towards you or your deck. This is one of the few deck types that I know anything about, so I love to help!

MJS154, I completely see where you're getting at and faster killing is always nice, however I don't quite agree on the CMC ramping part.

The Dragon Tempest in your starting hand or first draw is a godsent especially if paired with Dragonlord's Servant . For one of my faster dragons I have Skyship Stalker or Thunderbreak Regent .

Mana-Wise I've got Everflowing Chalice (cann be cast for 2 mana aswell) to get me 1 more mana a tad quicker or for 3 mana I've got Skittering Surveyor which lets me grab a mountain and is a nice early game block to creature threats.

It might not be the fastest burner out there but it's one hell of a hitter :)

(p.s. the thing I fear most is Deflecting Palm which my friend runs in his monk-bestow deck) (p.p.s. Satyr Hedonist is exactly what I needed for my gruul deck, thanks!)

This comes from love, I also have a Shirei deck and hate to see people misplaying him. Desecrated Tomb is overrated and should be pulled out, it only triggers once per turn. A better replacement would be Lightning Coils which gives you more creatures and more powerful creatures. I would recommend also pulling Liliana's Shade , which is a four drop for a land to your hand, Skittering Surveyor does the same thing and is a three drop. Soldevi Adnate is also pretty bad, most cards with a tap ability are in this type of deck. First you would only be getting 4 mana at the most, which is fine but underutilized. My final creature suggestion is to add more heavies. Where is the win-con? Where are the super demons who destroy things? Ob Nixilis, Unshackled , is perfect as is Razaketh, the Foulblooded

You also do not have commander protection. Sure you can re-animate him but you lose all of the creatures that go to the graveyard that turn before he died. Lightning Greaves , Swiftfoot Boots , Darksteel Plate , and most importantly Dark Privilege . Which is a sac outlet and protection.

I play Shirei built an izzet, rakdos and golgari 60 card deck around 4x copies of him and an EDH deck.

I would cut Doomed Necromancer , who lacks some recursion. Some one drops do the same thing but are 1/1s. Liliana's Shade is a bit unessesary as well. Pilgrim's Eye and Skittering Surveyor do the same thing which are also cheaper. Pentavus is not as good as some others such as Noosegraf Mob .

And you have too many lands, you only need most 34. I would recommend a Tragic Slip for removal, and a Bitter Ordeal for win-con

CyborgAeon Okay, in fairness, I once again did not even know Skittering Surveyor was a card, so, yeah. For my purposes, it's strictly better than Liliana's Shade , so, yeah.

I honestly tend to find Bottle Gnomes pretty relevant, as I often lose a lot of life, but I suppose I'm playing enough tutors now to where I can just grab Zulaport Cutthroat or something if that's really such a concern--I suppose I can cut him, though I will miss him.

I'm still kinda on edge about cutting Black Market --my meta is still fairly casual, but I have, in fact, won before with Exsanguinate thanks to all the mana from Black Market against a fairly competitive (but by no means optimized) Prossh, Skyraider of Kher deck (and some other peeps). I might find something else to cut for Pitiless Plunderer , but I'd rather not have to choose between both of them. (Also, something worth considering is that Black Market is harder to remove than Pitiless Plunderer , though they'd need exile effects or something in any case).

As for Sanguine Bond + Exquisite Blood , getting 10 mana isn't a problem for me, but I get what you're saying--it's not exactly the fastest combo available, and my deck probably doesn't slow the game down enough to make it competitively viable. All the same, there's just not that many better mono-black combos.

As for running more tutors and stax effects, well, for one, I actually still want this list to be playable in my meta (it's approaching a point where it's just too cancerous relatively to what the majority of everyone else is playing, believe it or not), so adding Trinisphere and Static Orb and the like would be very unsubtle and super cutthroat (though, yes, that's exactly what would make the deck more competitive, I understand that). Secondly, the list is getting pretty tight, yet again, so I'd probably have to cut some Shirei synergy for that sort of thing, which would probably be worth it, but would make me feel that much more soulless, honestly. Can never seem to strike that balance between not playing a whole bunch of staples and having a synergetic build...

Thirdly, while they'd absolutely be worth it, I'm not playing more tutors simply due to budget considerations. I know that might sound pretty laughable considering the deck costs $830 dollars, but it's the only list I have that I own in paper (well, most of it--waiting for more cards to arrive, as I keep cutting stuff), but I've been building it up over the course of 3-4 years. Budget is no object in cEDH, I know, but it is for me--the most expensive card in the deck is about $75. Spending $100 on a card isn't something I really want to do. I might find something to cut for Cruel Tutor , though (bad as it is).

As it stands, I think Liliana's Shade and Bottle Gnomes are out and Skittering Surveyor and Scroll Rack are in. A marginal improvement--still not good enough, though, you're right. If only I could run Land Tax + Scroll Rack ...

(Oh, and, on a completely unrelated note, this might already be a thing, but I was wondering if anyone had figured out a way to combo out with Timestream Navigator in a Prime Speaker Vannifar list. All you'd need is a 1-drop that recurs itself to either your hand or the battlefield, and, so long as you had enough mana and the city's blessing, you could take infinite turns. That might actually be a viable combo in cEDH).