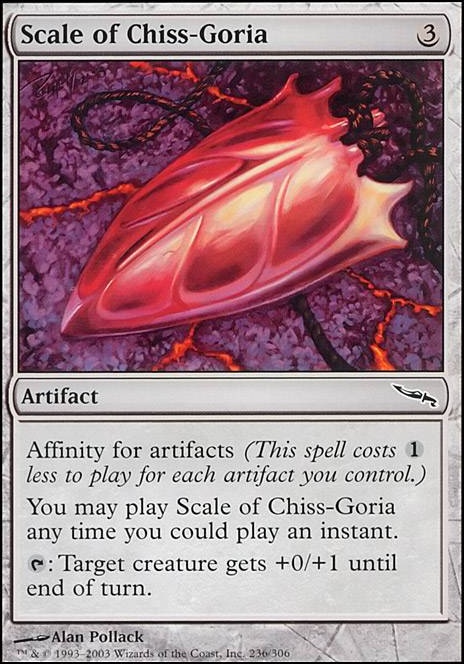 Tap: Target creature gets +0/+1 until end of turn.

I never missed my target
by crimsoncubic 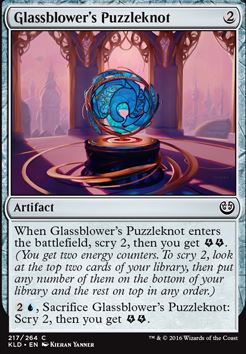 Legend of Zelda
by WelosOrigana

Lotus Petal could definitely be good in this deck Garchomp98. If I were going to add it I would probably cut the Vault of Whispers , one Plains , the Scale of Chiss-Goria , and one Tooth of Chiss-Goria . This deck is certainly capable of running with sixteen lands and with the added Lotus Petal I would think you can get away with fifteen. I think the Vault of Whispers comes out before Darksteel Citadel because Vault of Whispers is really only in the deck to maybe cast Vault Skirge without paying the life. On the other hand Darksteel Citadel having indestructible is important when facing cards like Gorilla Shaman . The Scale and the Tooth are also definitely two of the weaker cards in the deck.

Why not have Lotus Petal s? Like i'd go for 3 of them cut the Scale of Chiss-Goria , 1 Tooth along with 1 Bonesplitter or a secong Tooth. Or maybe Darksteel Citadel s? You need colors and fast ramp

Seems awesome btw i love to try it

babushkasara I checked out your deck and I am happy to say I am adding Mirage Mirror in over Goblin Charbelcher. That is the definition of over-powered in horobi. Don't know how I missed that before now.

Now for cards like Tooth of Chiss-Goria and Scale of Chiss-Goria I am not a big fan. They fall into the category of only being good if horobi is on the field. That's why I was originally using cards like Goblin Charbelcher and Dauthi Embrace. Both still have effects that can use if I'm starting to fall behind. But to be fair our decks have totally different styles.

What other cards on my list were puzzling you? I'd be happy to tell you why they're here.

I love Horobi and your deck looks really good. You've got some stuff I don't really understand the rationale behind,like Goblin Charbelcher though.

My deck, Horobi Jankness might have some ideas for you, if you're interested. Victimize is amazing and I also recommend Tooth of Chiss-Goria and Scale of Chiss-Goria.

lastturn I added Thoughtcast, I believe that was the affinity draw card you were referring to?

As for Mind Stone, I prefer to run Tooth of Chiss-Goria and Scale of Chiss-Goria as they can be played for free and can pump Glint-Nest Crane and Treasure Mage for blocking. I could sub out one of each to put in a couple Mind Stone's, however. The late game advantage they provide is undeniable.

As for the Talismans; the Borderpost cards are more aggressive, and provide Metalwork Colossus a greater discount.

Blood Moon has been added, they weren't in at first due to budgetary restrictions, but I might as well make this as good as it can be online.

Thanks for the tips, and keep them coming! :)

I've been considering Golem Foundry tricks for some time now. I've been thinking things like using Ornithopter, Bone Saw, Lotus Petal, etc. as free artifact casts. You could also replace some basics with Seat of the Synod & Tree of Tales to Affinity-cast Frogmites and Myr Enforcers, upping your artifact-casting-triggers.

Maybe some of that gives you ideas. =)

Kor Skyfisher can:1. Bounce a land to net an extra land drop if you have no lands in hand and haven't yet played a land.2. Bounce Thraben Inspector to create extra clues for card draw, especially good against control3. Bounce Flayer Husk after the germ dies to create extra creatures, good against decks plaing Chainer's Edict4. Bounce Tooth of Chiss-Goria which gives you an extra activation for free if you have three or more artifacts5. Bounce any creature post combat to give it pseudo-vigilance

Note: Glint Hawk can do all the things Kor Skyfisher does except only with artifacts.

When facing an aggro deck:

When facing a control/combo deck:

What to side out:

As a basic rule I will side out the Scale of Chiss-Goria first followed by 1x Flayer Husk, 1x Tooth of Chiss-Goria, and 1x Frogmite in that order. Although taking these cards out subtracts form the explosive potential of the deck in the early turns, they quickly get worse as the game progresses to a greater degree than most of the other cards in the deck.

What to side in:

Celestial Flare comes in against any deck that wants to win with one giant creature like a Slippery Bogle of an Ulamog's Crusher. It's good to know that if they attack with a tiny creature to try and protect their big threat, you can eat the small creature then play Celestial Flare at the end-of-combat step.

Dust to Dust comes in against affinity primarily because Dust to Dust turns into a double Stone Rain against artifact lands. This is probably the weakest card in the sideboard since the printing of fragmentize, I would suggest to cut this first when adding cards that better fit your local metagame.

Fragmentize is for any decks that play artifacts and enchantments. Can be very strong when used to blow up artifact lands and is incredibly efficient at one mana. I find myself boarding in all four if they have 10+ possible targets in my opponents deck.

Holy Light comes in against elves and delver, and basically any deck that plays lots of non-white 1/1's. Note: Holy Light will also hit your own germs and Vault Skirges.

Lone Missionary is primarily for burn, but you could bring in one or two against other aggro decks because gaining four to eight life can sometimes put you over the top.

Sunlance is the only removal spell in the 75 and gets brought in against decks that play creatures it can hit. Prized due to its efficiency at one mana, being able to both play a creature and a Sunlance in one turn can easily swing a game.

Note: The third Lone Missionary could be replaced with another Sunlance against creature heavy metagames or a Mana Tithe if combo is prevalent.