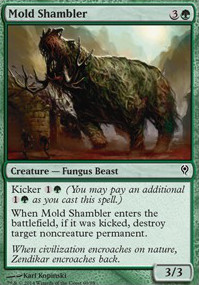 Kicker 1G (You may pay an additional 1G as you cast this spell.)

When Mold Shambler enters the battlefield, if it was kicked, destroy target noncreature permanent.

Lisette's Garden - Can this work?
by Chiru 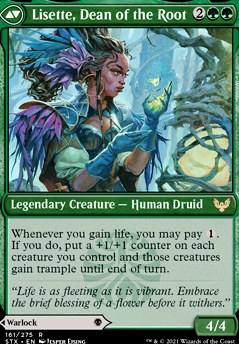 Just for Kicks
by Phule451

How do you feel about Arboreal Grazer ?

I feel like this kind of list has a few silly options - Mold Shambler bounce to lock someone off lands, a Essence Symbiote / Migratory Greathorn mutate subtheme or Slaughterhorn as a combat trick. If splashing another colour, cards like Crusher Zendikon or the RG riot beast.

Still, with beasts being printed every few sets this feels like something that is going to suddenly get an efficient option and be really good.

Some suggestions Verdant Force although big, you should be able to get enough mana as it makes tokens on every upkeep. Tendershoot Dryad is another one I would definitely recommend to add as the ascend trigger is super easy to go off from. Thelonite Hermit is another good one. Thallid Soothsayer is a bit slow but it gives card draw and goes with the theme. Mold Shambler is like a bad Reclamation Sage but goes with theme. Nemata, Grove Guardian is an interesting dude as he gives a worldly buff when going for the kill.

Hope these may help!