Kicker 3 (You may pay an additional as you cast this spell.)

If Grunn, the Lonely King was kicked, it enters the battlefield with five +1/+1 counters on it.

Whenever Grunn attacks alone, double its power and toughness until end of turn. 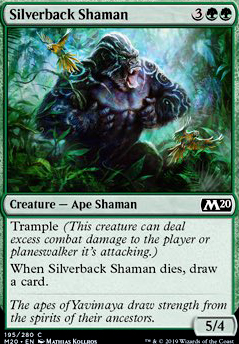 Boo the Terrible
by zswarat

I said the REAL One Punch Man.

I like this. Iwamori is one of those commanders that I have considered building a dozen times, but still never did because I didn't like resulting list. Yours looks very cool, I like the route you've taken. You should consider some ways to make your Saitama indestructible: Spearbreaker Behemoth , Hammer of Nazahn or something similar. Also, how about Gargos, Vicious Watcher as additional removal off of each Aura and fight spell? Bow of Nylea is a great value card that makes your attacks so much better. Vigor and Rite of Passage are awesome for fight decks. Klothys's Design can be quite a house in a deck with big creatures. And then, there is Return of the Wildspeaker . Oh, and I forgot Karametra's Acolyte and Grunn, the Lonely King .

I only have one monogreen Commander deck, and it has Grunn, the Lonely King at the helm. I really enjoy the mix of theme and mechanic, and it seems a better King Kong stand-in than Kogla, the Titan Ape . So mark me down for Chonks!

Iâd add Guardian Project , Beast Whisperer , Lifecrafter's Bestiary , and possibly The Great Henge for some card draw in the deck. The henge being much more optional since it costs a bit.

Harmonize is another good cheap card draw spell to pick up.

Savage Ventmaw will help produce a lot of extra mana for the deck.

Iâd cut creatures back down from 43 to 33 since some of the creatures that are just big bodies like Woolly Loxodon and Grunn, the Lonely King arenât as necessary for the deck when you can add more stuff into the deck to interact with your opponents and draw cards.

Rafiq Collector Of Many Heads*Voltron*

PizzaNinja305 well thats the idea either him or one if the back ups like Jenara, Asura of War or Grunn, the Lonely King maybe one of the tokens getting created through equipment but its mainly gunna be commander damge as the wincon