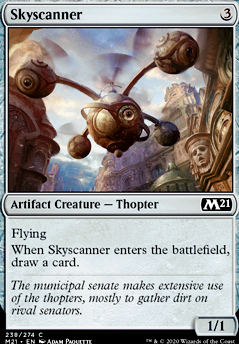 When Skyscanner enters the battlefield, draw a card.

Looks great! Do you have a special rule with your friends to let you use Ninjustu from the Command zone (Ã  la Yuriko, the Tiger's Shadow)? If not, do you just plan on casting it for 4 mana?

Cavern Harpy is a pretty big omission from the deck. It's a cheap and evasive threat that also bounces back your ninjas AND can also return itself to hand for only 1 life, making it near unkillable and completely resetable for more ninja shenanigans.

Do you play in a heavy Blue meta? I think Slither Blade would be slightly better than Merfolk Spy.

Mothdust Changeling also fits the bill as a potentially evasive "ninja" for value.

Withdraw can be a pretty cheeky spell in that you can target on of your creatures with the "Pay 1" ability and essentially get a good ninja reset/tempo spell that can also target two of your opponets' creatures when they are tapped out.

Skyscanner gets you a lot of value like Cloudkin Seer and Pilgrim's Eye.

I get the idea with the adventure creatures, but Smitten Swordmaster seems a bit weak because he has no evasion.

I'm also not a huge fan of Aven Eternal or Daggerdome Imp.

Some of your removal seems slow. You could get your hands on the downgraded Cast Down. Gigadrowse also seems like something you'd want.

Going to suggest Skyscanner as a budget option/cantrip. Simple to get out, has it's own evasion. "Non-threatening" until it's pumped that is...