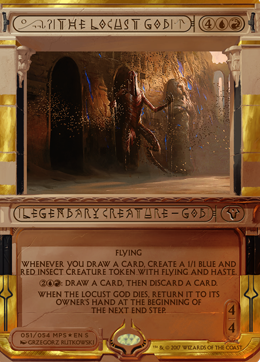 For all Locust fans, back in 2017 I did in Photoshop a custom Locust token with the invocation frame. I'll share with you, if you want to use them in your deck. (The original art was drawn by the artist "Enemy Design" from Deviantart, but modified by me later). Hope you like!:

"Focus the Locust". A meme expresion that soon appeared in my playgroup to advice the necessity of checking the The Locust God to try to avoid one of his infinite combos. I've never being atracted by combo decks, neither Izzet ones, but when Hour of Devastation came out with it's three new evil Forgotten Gods, and me being an Ancient Egypt fan, I knew I'll end building all of them. And curiously the one who drew more attention to me from the beggining was The Locust God. Maybe I find it funny and ver unique, maybe I decided to venture into the Izzet world, very unknown to me. The fact is that The Locust God became my first Hour of Devastation insect god deck, and my first Izzet one!

I love this deck, and, even it's not the one that I've put more effort on to improve and bling out, one thing is real: It's win rate in my playgroup is insane, and the key for this is that the Locust is a very explosive deck, and a very difficult deck to read. It's very tricky for the opponents to understand what's really going on until is too late, even if they have already played many times against the Locust. That's the magic of the Locust, The Suddenness. This doesn't happen to me with other powerful decks I own, as people predicts better when my plays needs to be controled or checked, and reach victory becames more difficult, despise the power level of the deck. Many of my playmates consider that the Locust isn't really my most powerful deck by far, and this may be truth, but the reality is that it's the most efficient I own nowadays.

*Disclaimer, This page is in construction.

A Plague of Locusts