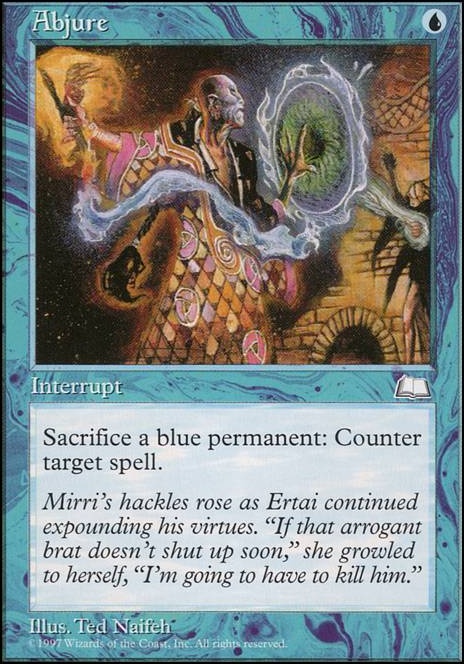 As an additional cost to cast Abjure, sacrifice a blue permanent.

I have added: Abjure, Cloud Cover, Fierce Guardianship, Flawless Maneuver, Reconnaissance Mission and Shark Typhoon. I have removed: Ashes of the Abhorrent, Fight or Flight, Mark of Asylum, Mystic Remora, Crashing Drawbridge and Talisman of Dominance.

It's been a while and wanted to revisit your deck I see you've made some changes and I've played with quite a few cards with my own variant of the deck (currently not up-to-date, check back later today I'll update it).

Cloud Cover has saved Alela's butt more times than I wish to count, if you can get your hands on it Fierce Guardianship is a no-brainer, there are other less expensive cards that can also act as strong counter spells in the deck such as Abjure and Familiar's Ruse. Dowsing Dagger Â Flip and Sword of Sinew and Steel are both really solid additions with all the 1/1 flyers you have to beat face in with. Sword can also give Alela protection from kill, burn, and some exile effects while clearing artifacts and planeswalkers. Teferi's Ageless Insight can turn those "draw 1 on hit" effects into "draw 2 on hit" effects. Although this next card is more of a win-more effect Shark Typhoon really synergizes well with your no creature deck creating even more 1/1 massive flyers. also Reconnaissance Mission is another Coastal Piracy

You don't have Talrand's permission

Maybe Abjure, and Back to Basics.

Pulse of the Grid is interesting, but not super needed.