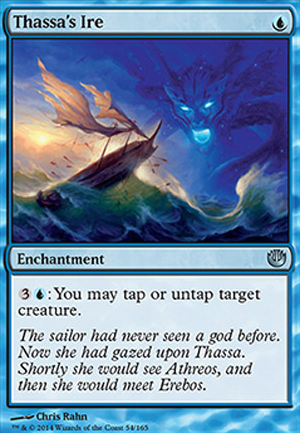 : You may tap or untap target creature. 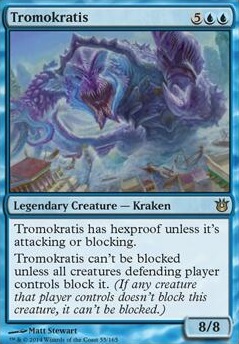 Kenrith, the King of Infinity

Get yourself an Esper Panorama to help fix your lands, and maybe a Manalith if you think you need more mana rocks.

For tapping/untapping, consider a Thassa's Ire , which, though it costs more mana to tap/untap than Freed from the Real , it doesn't attach to the creature, so isn't destroyed if Merieke is destroyed/bounced/exiled. You may also want (or maybe not) a Village Bell-Ringer if you want to surprise-flash-uptap to give Merieke (and your other tapped guys) the ability to re-tap and cause mayhem at instant speed.

What are you win conditions? You've got a very controlly build, but how are you going to reduce opponent's health to 0 if they are also playing control, like a Mill or lifegain build? Also, with Detection Tower being your only way through Hexproof/Shroud, you may need to consider more ways to allow Merieke through those barriers.

You may also need to deal with threats before they hit the battlefield--Mereike doesn't protect you against ETB effects, and some of those can be pretty bad--so getting yourself some cards that allow you to selectively remove bad threats from your opponents' hands might give you the edge. Plus, apart from Counterspell and Dissolve , how can you stop enchantments and artifacts with ETB effects from hitting the battlefield? Fortunately, Esper does this kind of control best. Maybe playtest with things like Tidehollow Sculler , Sin Collector , and/or Vizkopa Confessor (this last guy is really nice because Extort will help you get that life back while draining everyone's health--stupidly powerful in a 4-player game). There are other cards that do this too but I'm not remembering them--you have lots of options, especially in Dimir ( Thought Erasure comes to mind, and I thought there was a creature from Guilds of Ravnica that did the same thing but I can't find it atm).

Turn 2 Freed from the Real

Cerulean Wisps? It cantrips, and it can power out a little bigger spell. Refocus doesn't seem as good- its a poor Manamorphose at best. Ornamental Courage might work as bolt protection. Second Wind is interesting in that it can power out quite a large spell the turn after its played, but it isn't a 'go infinte' option. Thassa's Ire is interesting in that it isn't an aura, but the mana requirement makes it hard to work with. I've never made Thousand-Year Elixir work.

Thank you Ravenrose for the suggestions. I'm glad you like the flavour :) I will definetly find a place for Vortex Elemental in the deck. Thassa's Ire looks to be a quite good defense against early threats as well!

Since I like doing somewhat of a theme in my decks, your other suggestions is on point in regards to the flavour of the deck. But most of my playgroup tend to play some pretty well tuned decks, And I feel hard pressed to add lackluster cards in terms of power level just to fit the theme. I do like the suggestions nonetheless!

This deck is bursting with flavour and I love it. You might also want to consider Vortex Elemental as a 1 drop and good defence. I find that people leave me alone for a while when Charybdis (my nickname for it because it bears resemblance to the mythical whirlpool monster) is on the field. Entrancing Melody refers to Sirens, which are also creatures of the deep in Greek mythology. Plus give a nod to mermaids as well. Serpent of the Endless Sea is not only flavour but is an arguable adaptation of Jormungandr. Thassa's Ire and Thassa's Devourer link to the sea god you are playing already so ... I thought these might fit in too. Deep-Sea Terror and Jokulmorder might also be worthy of consideration. I hope these have helped a little!

KABO5e on Can I tap an attacking â¦

like others have said, you can't choose to tap a creature when you declare it as an attacker. During that step it either does or does not tap.

However, an untapped attacking creature (such as one with vigilance) could still be tapped after declaring it as an attacker by way of a cost or ability of another card.

Cards with convoke (ie Stoke the Flames) or a card like Thassa's Ire come to mind.

Vorel of the Simic

first of all i really like the deck and the monstrosities it produces. i personally play EDH casually with a group of friends and therefore is everything i know based on my experiences there. my very first deck i ever built was Varolz, the Scar-Striped and it did similar things with all sorts of hydra's and counter doublers. this deck never won. the reason was that i needed several turns to get out a big dude, only to have it struck by Anguished Unmaking. for these kinds of decks you need explosive turns where once you're set up, you can keep going each turn untill your opponents are trampled over. the first thing that came to my mind was Everflowing Chalice or Gyre Sage. combined with Sword of the Paruns a gyre sage that taps for 4 green mana becomes an infinite mana source. Mistcutter Hydra could now be a hasty 10000/10000 coming at your unsuspecting opponents. Gemstone Array is really usefull when you are producing immense amounts of mana, for you can use it as a converter to make UG for vorel.

untappers you can use multiple times in a turn if you have the mana: Filigree Sages, Thassa's Ire, Sword of the Paruns

i'm just mentioning things that i think need to be replaced, if a card is not mentioned, it can stay imo.

Clever Impersonator and Progenitor Mimic. copy effects dont copy counters on a card (as written in rule 706.2) so they have no real value in the current deck and should be replaced.

Trinket Mage: are Sol Ring / Sensei's Divining Top important enough to have this card in your deck? i think not. (remember, opinions)

Master Biomancer: currently you have no effective ways of adding power to your creatures that do not generate +1/+1 counters by themself. therefore you should either remove Master Biomancer or add cards like Death's Presence.

Lorescale Coatl, since your carddraw is limited this card is too slow.

Oran-Rief Hydra i smell something of a mini landfall subtheme in the deck as it is, however this isnt what you currently are trying to do so that makes this card way too slow.

Sapphire Drake: an alternative would be the outlast creatures e.g. Tuskguard Captain its way cheaper and does the job. alternatively you could run them both.

Sphinx of the Final Word: are your instants and sorceries the things you win your games with? i think the answer would be: no, my creatures are going to win the game for me. therefore i would replace this card with Archetype of Endurance if protecting is what you want to do.

Young Wolf: loses its undying ability if a counter is placed upon it before it dies. replace with Servant of the Scale

lastly, 37 lands is fine, but the amount of ramp is not. Nature's Lore and Chromatic Lantern are the only cards that make sure you have your lands. you have green, so add cards like Cultivate, Kodama's Reach, Rampant Growth, Explosive Vegetation. also a Simic Signet is nice to have.

this deck can go anywhere and i had lots of fun trying to figure out a path to playing fun games, i realise that i have been rambling on and on so i would really appreciate your opinion on the matter.

Zur's search for the Gods

You should keep Banishing Light because that's also great removal. Maybe take out Thassa's Ire because it's quite expensive for the effect. I think Arbiter of the Ideal's ability still works, but there's no counter on the permanent, since the Gatherer page says the counter is only a reminder that it's an enchantment. But you might have to check with a good judge.