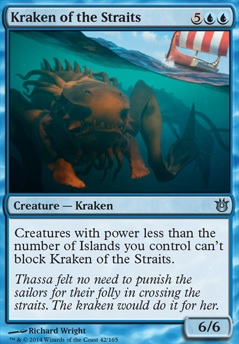 Creatures with power less than the number of Islands you control can't block Kraken of the Straits.

Kraken of the Straits occurrence in decks from the last year 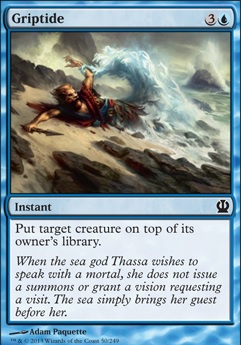 Nature's Wrath (From The Depths)
by Imperetor_Aeternum

Kraken of the Straits Discussion

Engulf the Shore, Sapphire Medallion, Kraken of the Straits and one of my personal favorites Killer Whale

I would probably take out Wrexial and Sky Swallower, since, from the looks of it, you're mainly relying on Quest for Ula's Temple to cast them. Maybe you can consider Kraken of the Straits, Lorthos, the Tidemaker, and Crush of Tentacles as replacements?

Not really a kraken, but Crush of Tentacles is pretty close. Some other nice biggies are Stormtide Leviathan, Lorthos, the Tidemaker, Kraken of the Straits, Inkwell Leviathan and Colossal Whale. Maybe you should throw in a couple of Harrow and maybe Arbor Elf to give you some ramp so you can play your big bigges.

A friend of mine has this mono-blue stompy deck, where he mana screws the opponent instead of ramping his own mana. He uses Spreading Seas and Boomerang or the mana screw, and Cyclonic Rift no deny the opponent any board presence. Boomerang imprinted om Isochron Scepter can be pretty devastating.

Doom from the Deep

Thanks lursthegreat! Inkwell Leviathan is a pretty powerful creature that isn't on the deck just because of it's mana cost. But it could substitute Kraken of the Straits or something on the sideboard no problem. : )

Thanks to you too The7thBobba! Not sure if I would use Cryptic Gateway just because one copy here in Brazil cost over one third of the price of the rest of the deck. But thanks for the suggestion!

Thassa,God of the Giant Sea Creatures

Your list seems solid. I'm not sure what direction you want to take it, but I have some suggestions for swaps of current cards.

Brine Elemental seems ok but really overcosted for a one-time effect. If you want to keep it and make the "pickles lock" you can swap your Clone for Vesuvan Shapeshifter which allows you to repeat the elemental's ability on each of your turns.

I used to run the big dumb beaters like Kraken of the Straits and Sealock Monster, but I found even in more casual games they either don't get cast or don't do anything useful. Maybe run another clone effect or two, like Clever Impersonator or Phyrexian Metamorph? Those are very flexible and very awesome cards.

Piracy seems not that great unless you're trying to get your opponents to tap out before a step/phase change. I suppose it could also be decent in 2-headed giant. Maybe this just become another counterspell, like Arcane Denial?

Quest for Ula's Temple was very underwhelming for me when I ran it in my Thassa deck. It's a card that you either a) need to get lucky with, even with scrying, b) have top deck manipulation for or c) have to build around by having 20+ creatures of those types. I'd rather have Mystic Remora in a 1-drop enchantment spot.

I would also suggest adding Blue Sun's Zenith and/or Stroke of Genius, since you have the ability to create infinite mana and that can finish off one person on its own. Leyline of Anticipation has also been an all-star for me. Being able to leave all your mana open on everyone else's turn is so powerful in a control deck.

I cannot yet tell you what this deck plays like for me; I am new to MTG and I like to play combo decks that both control and have a bit of aggression. I built this one with some exceptions because I have many of the same cards. I replaced some cards and added a few that I felt might win the end game once the tapping, trapping, and milling had done their work.

I side-boarded Glacial Crasher for now; I only play with my husband and he does not run a red deck.

I did not have Ninja of the Deep Hours so I replaced it with 2X Breaching Hippocamp despite there not being Ninjitsu. I also did not have any comparable defender walls with 7 Toughness for such a low mana cost, so I added in three creatures: Glacial Stalker, Dirgur Nemesis (who happens to be a defender with some bite,) and Kraken of the Straits. These are high mana cost but I added Mage-Ring Network to build up additional mana, if it is required (and it very well might be.) I added Leviathan to basically try to end the game.

I had to find something to replace Counterspell because I do not have that card; I replaced it with Psychic Rebuttal which also has Spell Mastery so I can copy the countered spell. I added 2X Annul because my husband runs a White/Black Ally deck that has a lot of enchantment in it so I needed a way to counter his life-building strategy. I did not have Snap, High Tide, or Telling Time so I tried to build that up using Skyline Cascade for mana and then adding 2X Retraction Helix.

I have no Clutch of Currents. I decided instead to add 2X Fascination, 2X Void Snare, and added Anchor to the Aether (which also offers Scry 1.) Then I added Tome Scour because it is one of my favourites at 1 blue mana cost for just disrupting my husband's game plan. I love Sorcery and Enchantments. I had no Singing Bell Strike so I had to replace it out then add a few more of my own favourites. 2X Aqueous Form, 1X Sensory Deprivation, 1X Containment Membrane, 1X Monastery Siege, 1X Reduce in Stature, and 1X Pin to the Earth. My go-to blue favourites so far (but I have many more to learn.)

I am going to play this deck tonight and see how it feels. Blue is still tricky for me yet because I am a new player but I am excited to have used your construct and worked with it. Thank you!