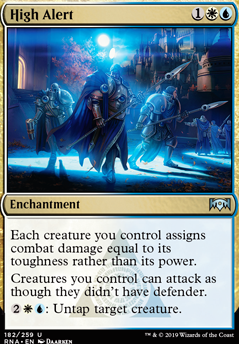 Creatures you control can attack as though they didn't have defender.

Walls with teeth
by foxinsox 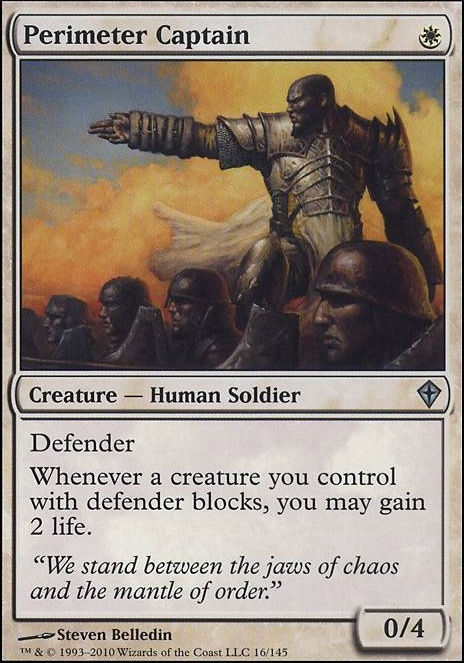 The Best Offense is a Wall
by Stardragon

Look at them butts
by Brenda_ann89 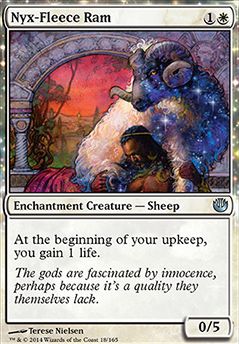 Balls to the Wall
by Kudzuu

Hello Beotooth, thank you for commenting!

This deck is meant to play casual Battlecruiser Commander, so we do not allow infinite combo in our meta. Given the untap ability built into High Alert, I a m not playing Overgrown Battlement or Axebane Guardian in this build.

If you like the deck don't be shy and upvote!

I'd say replace indomitable ancients with fog bank, since it doesn't work with arcades' ability. arcades only affects creatures with defender, not with high toughness. also, cards like High Alert and Assault Formation offer some redundancy for when you lose arcades

Where is High Alert??

We thank you for your comment and your enjoyment in reading our Bible!

The cards listed are more tailored to a build of The Wallmaster that is far more combat-based.

Assault Formation is a great mana sink for a finisher turn, being able to buff all our walls up very quickly and performing an alpha strike. We use High Alert instead, as it acts as a combo piece with Axebane Guardian and enough defenders.

This could be good for the list due to it being easily grabbed by Muddle the Mixture, but as of yet there's no space.

Shifting Wall is actually pretty viable for our list, acting as a secondary Shield Sphere, at least CMC wise, for a free draw with Arcades. The issues are the bad interaction with Cloudstone Curio, or moreso, the lack of interaction, and the fact that we need to put at least 1 mana into it to make it stick. It could be useful in an Intruder Alarm wall-spam turn, however.

Necropolis is interesting, but the CMC is too high for the base stats and effect, also we tend to appreciate recursion, (Sevinne's Reclamation, Dawn, Eternal Witness) over scavenging.

Dragon Throne of Tarkir is a power-matters card, which we can't commonly see being higher than 3. However, it is very powerful on those big, swingy turns.

Our deck looks for combo over damage, we may build a more 'restrained' Bible sometime, which is more based on beating face. If that comes, the Throne is in.

KongMing I really like Zendikar, also! Hopefully there will be some cool and fluff(-ish) cards in it. While I really love the mutate mechanic, I just think this is not the deck for it. Those cards are really nice, especially Sea-Dasher Octopus, but I think they would water the deck down and you might run low on "denfender draws". If you put them in a deck please tell us the outcome!

bl4ckb0l7 everything what THCue said. I was never in need for High Alert and also have a very high win rate. My group always rolls their eyes when I bring Arcades to the table.

Want to make an Arcades-Deck and found this one.

It looks awesome, but I wonder, how vulnurable is it to creature removal. There is only one "backup" in the form of High Alert, if Arcades is not on the field.