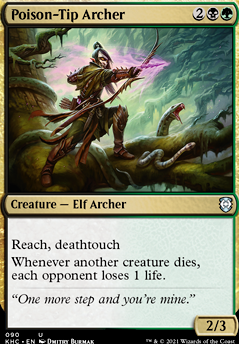 Deathtouch (Any amount of damage this dealt to a creature is enough to destroy it.)

Whenever another creature dies (is put into the graveyard from the battlefield, tokens enter the graveyard before ceasing to exist), each opponent loses 1 life.

Poison-Tip Archer occurrence in decks from the last year

Welcome to the Jund-gle
by Beeaker

Tea Pain (not the rapper)
by speedbump07

May I suggest Lathril, Blade of the Elves as part of the 99? In a perfect world she makes you abomination even more abominable, then lets you sacrifice 10 elves to deal 10 damage and if you have Poison-Tip Archer on board, it means its 20 damage to everyone! Followed by a good abomination sac to deal the remaining damage and killing the entire board. Other than that, Fyndhorn Elves and Elves of Deep Shadow for early ramp, and Elvish Warmaster is a cheaper, better version of Lys Alana Huntmaster .

Also, Song of the Dryads is such a cool removal card for green, you can even "permanently" deal with tricky commanders, and it also activates the forestwalk in Elvish Champion , allowing for a beat down plan in case they're up to your fling strategy.

Joraga Warcaller is also very sweet for this deck!

I cut the aristocrats cards like Zulaport Cutthroat and Poison-Tip Archer Falkenrath Noble etc. they just werent doing enough to win. Average cmc is a little on the high side at 3.5, but the idea is to reanimate the 5 cmc spells, not cast them. Considering some discard outlets. Strongly considering Smokestack. This deck has won numerous games, but in ways that are slow and grindy and uninteresting for others players who basically dont get to have any nice things. Does anyone have an idea how to speed her up?

Another one for me is Poison-Tip Archer. I had a super fun elf-ball deck in standard that absolutely loaded the board with Elves and then I would cast Find / Finality to target one of the Archers and it was usually enough to wipe the board on both sides. Trigger city, especially if I ended up with multiple Archers on the board first.

You might consider something like Poison-Tip Archer as well. Helps round out your curve a bit more if you cut the right cards and would play very well with something like Ezuri regenerating cannon fodder elves that keep dying.