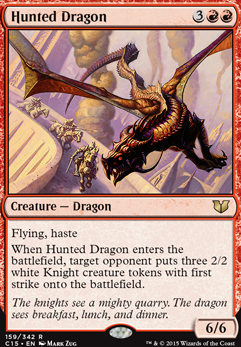 I haven't played the deck before. It's usually called Torpornaught (After Torpor Orb and Phyrexian Dreadnought ).

Besides Dreadnoughz, the hunted monsters Hunted Lammasu , Hunted Phantasm , Hunted Horror , Hunted Dragon and Hunted Troll propably are your best best, also Leveler and Eater of Days . If you want to protect the creatures, playing U for counter spells seems good. As Horror is the biggest beater for the least mana, maybe go UB? WUB would also be good if you don't want to spend the money on Orb.