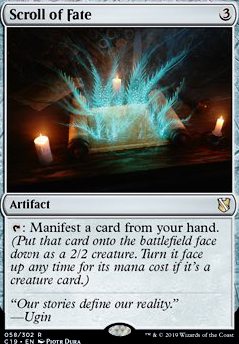 : Manifest a card from your hand. (Put that card onto the battlefield face down as a 2/2 creature. Turn it face up at any time for its mana cost if it's a creature card.)

The King Everlasting
by WUBRG87

A work in progress
by HierLTD

A small addendum, double face and meld cards can't be 'turned' face down by things like Ixidron, but they can still be manifested by things like Scroll of Fate, because the game doesn't realize their double face cards at that point.

Great Deck! I love Marchesa! What are your thoughts on giving creatures haste through Hammer of Purphoros or Fervor? It would help get +1 counters through dethrone to help protect your creatures one turn earlier, and help deal out a little more damage since your creatures are in the "1-2 Range" as you mentioned. I love the idea of using Scroll of Fate to cheat lands and other big things out! I'll be adding that to my Marchesa deck: Life After Death, and Death After Life

I have a non-morph creature that I manifest with Scroll of Fate, then pay the CMC to turn it face up.

Later I play Ixidron which turns it face-down again.

I do touch upon Sneak Attack in the notable exclusions part. My reasoning on it is that the vast majority of the creatures in the deck are <4 CMC, so there's not a huge savings cheating them out, though it's certainly not bad either. the big problem is that it requires you to have creatures in hand, which you'll probably run out of quickly. I felt Shifting Shadows was better in some respects since it guaranteed I would get a creature on board every turn it triggered. Sneak attack is also ~$30 or so and so it's not the most accessible card. So far Scroll of Fate has been working well in a similar position though. the ability to put out lands, artifacts, enchantments, planeswalkers, & creatures is really a huge upside, and even at once a turn cycle, it's really making an impact when I use it, often just by giving me some land ramp.

All Is Dust is fine, but I would put it in as a substitute for a board wipe, rather than spot removal. Unstable Obelisk is a slightly below average, but still "ok" mana-rock, so even if I never need to activate the removal clause it's still "fine" overall, and generally there's only ever one or two problem cards like Rest in Peace or etc. in any given game.

I think you're right, if I was in a meta with more pillow fort I would definitely want all is dust though, or Aura Thief, etc. definitely adjust things to your meta. for me it hasn't been an issue so far though.

if you're a fan of MLD, go for it! Definitely able to break parity on those effects with marchesa, so if you and your group are about it then it's certainly viable.