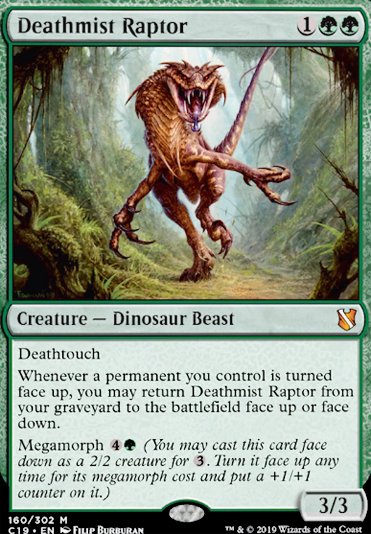 Whenever a permanent you control is turned face up, you may return Deathmist Raptor from your graveyard to the battlefield face up or face down.

It has functioned pretty well so far. Most of the control and removal package is in the morph creatures rather than instants or sorceries, so it can seem pretty bare at first glance. I have been considering Temur War Shaman to synergize with Deathmist Raptor, but I donât know if heâs worth the slot for the possible repeatable creature removal since he doesnât really help the rest of the deck.

Phule451 yea, I thought all night about a combo with zoetic cavern, turn a land to hand, play it for free with cost reducers and sacrify the Deathmist Raptor with some altar and which returns to play when you cast again the cavern.

I personally really like Deathmist Raptor . I use it in conjunction with Eldritch Evolution to get Gigantosaurus out. But I also have Den Protector in my deck to recur the Raptor.

Also, Aspect of Hydra is a cheap staple in mono-G devotion style decks.

Mono green stompy is competitive (in some metas). Aspect of Hydra or Nykthos, Shrine to Nyx etc. Similarly, there are a bunch of ramp decks that look to play 4/5 drops, with Leyline of Abundance offering a lot to that.

Carnage Tyrant is a solid anti-control card. Deathmist Raptor is likely consigned to weird morph/cloudshift/reanimator brews. Imperiosaur is the most solid of the modern dinos- and underwhelming. Territorial Allosaurus is flat better and still not great. Runic Armasaur or shaper's sanctuary might be sideboard-worthy.

I could see a Wayward Swordtooth/Ranging Raptors setup existing, but I doubt it would be budget by any means.