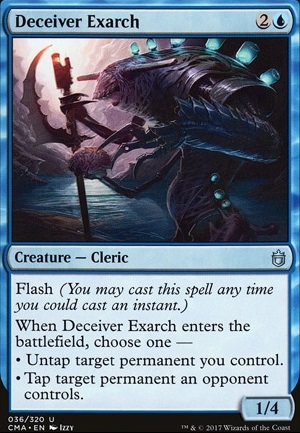 Flash (You may cast this spell any time you can cast an instant.)

When Deceiver Exarch enters the battlefield, choose one ---

Deceiver Exarch occurrence in decks from the last year

Nicol Bolas, The Ravager
by ZacKrell

Does Deceiver Exarch combo with Deadeye Navigator and Yarok, the Desecrated for infinite ETB triggers? Also, great budget lands are the vivid cycle, Vivid Marsh etc. because they enter with extra counters from Yarok and there are a couple ways to flicker them.

Yâall gotta realize that thereâs a HUGE difference between Heliod/Ballista combo, and the original, true, t4 combo- Splinter Twin. The keyword âflashâ is an incredibly important keyword. Slamming Pestermite or Deceiver Exarch on the end step after your opponent just tapped out was devastating. Thatâs not possible with this combo. None of the pieces are instant speed. That makes a world of difference.

Also, the colors the combo is in. Red/Blue twin combo made for an incredibly oppressive Control deck that could just win in one turn whenever they felt they had counter backup/ or just because you tapped out. You all are talking about a g/w Heliod/ballista deck. Not controlling, at all. It would more than likely be a deck committed fully to the combo, cards like Traverse the Ulvenwald and similar will probably be used to help locate key pieces to win.

These two distinct differences (flash, and color of the deck) are incredibly important when considering if the combo will get banned. Iâm not even convinced itâs playable.

Boza on Artifact Combo deck - any ...

The only "combo" I see is the ability to untap the artifact cards multiple times like Steel Overseer .

This is not very powerful I think and is too reliant on a single card. Here are the rules for this tournament.

If you are looking for combo ideas, Splinter Twin and Deceiver Exarch were in the same standard together, so it is an option that will only take 4 rares and 4 uncommons, filling the rest of the slots with whatever. This gives you New Pryrexia, Mirrodin Besieged, Scars of mirrodin and Rise of the Eldrazi (4 sets) to work with. The next sets are Innistrad block and Return to Ravnica (not counting core sets), which give you a ton of powerful cards in blue-red to work with. The rest of the cards can easily be a swath of control cards that were available in those sets.

If your proxying, go all out.

Im going to go ahead and not assume that you have anything quite yet and go through the common inf mana lines as well as infinite The Chain Veil . Sorry if these are redundant, but I feel like I shouldn't assume.

With inf mana, anything that has forced draw x or mill x wins the game.

Another reliable win con is Karn, the Great Creator and Mycosynth Lattice as long as your opponents don't have a board presence.

With inf mana Deadeye Navigator combos, you can add in Deceiver Exarch to any of them and tap down your opponents at upkeep or better yet Riftwing Cloudskate / Venser, Shaper Savant to bounce all of their permanents.

You could also Teferi, Mage of Zhalfir + Knowledge Pool / Omen Machine to lock them out of casting spells

Hopefully at least something here helps!

Holy moly I don't even know why I post on these forums sometimes.

Alright, lets take a peek at the arbitrarily linked and now tangential Scute Mob . I'll even give us the benefit of the doubt that we untap on turn 3 with 5 lands to trigger the ability. Its unlikely you will get a turn 3 trigger for scute mob, as scute mob takes your turn 1, and there are no ramp cards that give 3 lands into play for 2 mana (with one small exception Summer Bloom but that means you're holding 1 scute mob, 1 bloom, and 5 forests in starting hand, or that you draw them by start of turn 2, so 7 specific cards of a 9 card hand).

So assuming no blockers, no combat tricks, and no pumps from you, as well as getting the trigger starting turn 3, its taking 9 turns to kill the table. This also assumes your damage spreads all nice and evenly with no damage being wasted as overkill on a player.

And a bonus one

Yeah dude, Scute Mob is a noobtrap card, just like Sunbird :/ Its a threat, but its such an inefficient and bad threat that other people will win faster and easier than you with either of these cards. That's why its removal bait.