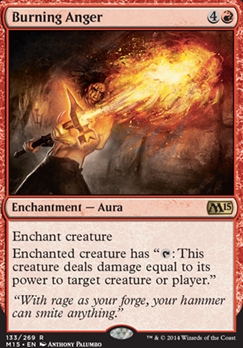 Enchanted creature has ": This creature deals damage equal to its power to target creature or player."

Burning Anger can be used in reponse to the tap trigger for Storm Herald decks. However this isn't standard, so probably bot as iportant to you.

There are things like Claim the Firstborn which can untap. Plenty of thoose so I won't go into detail.

Ram Through could be interesting.

Return of the Wildspeaker cares about power.

I'm currently working on a Kresh the Bloodbraided deck Special K. There's a few cards I'd like to throw in the mix. I'm thinking I'd like Sneak Attack, Bearer of the Heavens, Burning Anger, Hydra's Growth, Praetor's Counsel, and possibly Fungal Sprouting. But the major concerns I have are: messing up any synergy I currently have, and figuring out proper cuts. Anyway, any help is appreciated.

Brawl is banned in modern. The closest thing to that is Burning Anger

Creatures with wither or infect can throw counters around with Fire Whip, Power of Fire, Lavamancer's Skill and Burning Anger. The Hateflayer goes crazy with one of these to tap, then untap, repeat as often as you have mana. Pretty funny on Stigma Lasher as well.

You have a LOT of creatures that would be great in a Soul Foundry because of effects that take place as they enter of leave the battlefield.