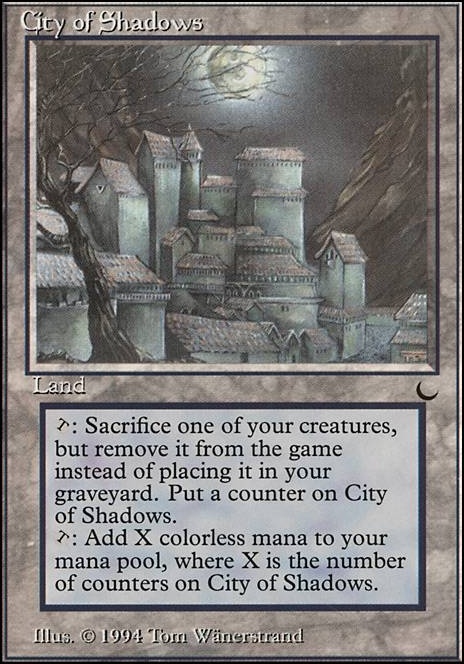 , Exile a creature you control: Put a storage counter on City of Shadows.

: Add to your mana pool, where X is the number of storage counters on City of Shadows.

Preaching to the Converted
by ClockworkSwordfish 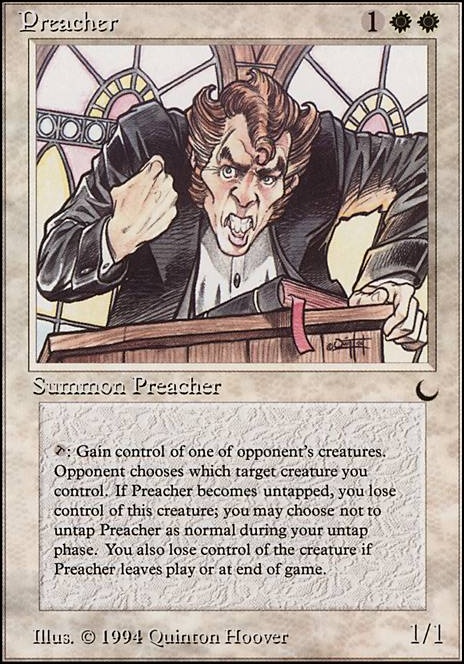 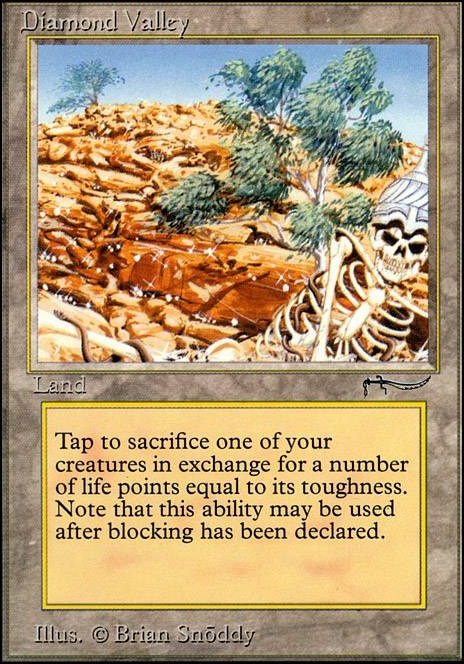 _Putrefax: While I agree that I do struggle with Rest in Peace, I think that's just an unavoidable part of playing mono-black. For the moment, though, it's a small enough problem that I'm not willing to devote two slots to a different combo, where one of the two slots in that combo (Mindcrank) actively hurts me (by giving my opponents a GY to play with).

I actually have tinkered with the counter lands, but they've never quite... worked right here. They make it so that, essentially, I am forced to proliferate each turn, which is rarely the right move. Actually, the one land I HAVE considered is City of Shadows, but that seems perhaps a little janky even for me.

And yeah, I have a bunch of stuff to add from Ikoria and C20! The highest priorities are Bastion of Remembrance, Deadly Rollick, Netherborn Altar, and Nesting Grounds. I may also run Daring Fiendbonder and Dredge the Mire, but I'm more doubtful on these.

I suggest Pemmin's Aura for untapping Bloom Tender and obtaining infinite mana, in the same fashion as with Freed from the Real .

As a note on LED, just be patient, maybe you'll find a damaged one somewhere... buy it for "cheap", sleeve it and nobody will ever know. This happened to me months ago with a City of Shadows with a horizontal crease... Snagged it for 3,5 bucks!

You have six walkers which can produce tokens. Have you considered City of Shadows ?

Hey qwikster thanks for the kind words! Glad to know that someone took the time to read some of my ramblings; I appreciate it! :P Also awesome that it inspired a build! Link me when it's done if you decide to post it on here. ;P

I like the idea of Plasm Capture especially the flavour text that includes a quote from my second favourite commander: Vorel of the Hull Clade It's a nice addition. Its just personal preference and group/meta opponents when it comes down to deciding on specific counter spells. I might test it out one day.

Saprazzan Skerry hmm this one is new to me, thanks for pointing it out. It's a nice piece, and once again I think a little down to personal preference. You could use Saprazzan Skerry or a bounce land like Dimir Aqueduct both have their advantages and disadvantages. An advantage of Saprazzan Skerry is that it doesn't require the bouncing of another land back to your hand, but in the case of the bounce land it could be a benefit for an aditional landfall trigger for use when Exploration is in play with Lotus Cobra or even Horn of Greed or the effect of the land itself repeating the ETB triggers of Bojuka Bog or Halimar Depths .

A disadvantage of Saprazzan Skerry is that it only enters with 2 counters. That's cutting it really close as you already have to deal with Pentad Prism coming in with only 2 and making it hard to use without having Atraxa out, but if she dies early...oof it's a set back that you have to manage as we have no way of replenishing counters on it. 3 like Gemstone Mine I can understand, but 2 is asking for Atraxa to be ready and available to proliferate it after the first use. That is a little too needy for my liking for it being a land. Nice spot though.

I like City of Shadows . I don't like that you have to sac a creature for it, but nothing worth having comes easy right? The problem with that is that we don't link sacrificing our utility creatures willingly as we care not for the resurrection of a damned soul...may they Rest in Peace . :P However in response to someone targeting to kill or exile Atraxa we could activate it and send Atraxa back to the command zone. It's an idea. Its a nice spot.

I will at some point be revamping the land base to incorporate the Coffers combo Urborg, Tomb of Yawgmoth + Cabal Coffers as so many people in my group are using it. I've resisted the temptation, but I don't think I can keep up with the massive amount of mana available so easily to them without it. And when it's out early....its just too insane. We fall behind a few turns because of this.

So when you build Atraxa how about you try the Coffers combo and give me some tips on how I could revamp the land base, as it feels like a massive undertaking which could involve cutting some pieces from other areas to make space for more land and land tutors.

Actually a Voltron Control deck might be easier to build than this was...it'll probably be more straight forward and less convoluted than my build, as was trying to make the theme quite unique since Atraxa is so popular.

Thanks again for checking out my current masterpiece! Keep in touch with your build ;P