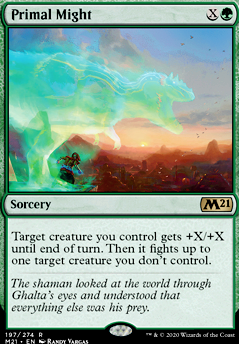 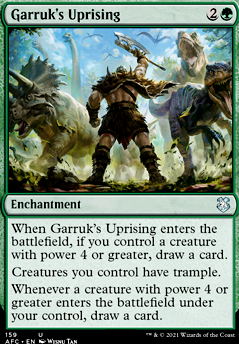 The Elder Dragon's Blackblade
by Firedogboys 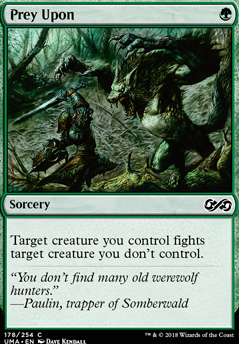 Iâd suggest Primal Might is a strictly better version of Prey Upon.

Also, it feels like youâre very all-in on the fight theme - have you considered Hornet Nest as a secondary fight-profiting creature?

Do you think that, in the flavor text of Primal Might , the "his" refers to Ghalta or the shaman?

just gonna go through some hard stats real quick cards that give you card advantage ie gets a card from your library into play or into your hand: 7 cards that ramp you ie gets lands into play, produces mana, makes creatures cheaper: 17 cards that can destroy your opponents creatures/artifacts/etc :5 of those 5 cards they only deal with creatures and most need to be dealt damage first. so an opponent plays a proaganda/ghostly prison you cant attack your deck is useless. green, red, white have some of the best removal for almost any permanent. problematic artifacts and enchantments get the Wilt , Nature's Claim , Return to Nature , Krosan Grip , Crush Contraband to name a few. opponent has a magus of the moat or another problematic creature? Path to Exile , Swords to Plowshares , Abrade , Lightning Bolt , any number of efficient fight spells like Domri, Anarch of Bolas , Prey Upon , Inscription of Abundance , Primal Might . opponents threatening to cast a board wipe? Eerie Interlude , Cosmic Intervention , Unbreakable Formation .

In short, a bit less ramp, a bit more card draw, and you really really need interaction. You can't expect to make a dino army and not have anyone try to interact with that. I know dino smash but dino can be smart too, dino can be clever girl.

I really like the idea of The Prismatic Bridge as a buildaround, but I don't think this would be where it goes. My 50 cents:

Honestly, I imagine that Bridge goes in a ramp deck that can make a 5-color mana base work, and has a lot of big boom-booms like Ugin, the Spirit Dragon , Koma, Cosmos Serpent etc. If you want to stay mono-green though, I'd suggest you slant more towards a traditional green aggro deck, but with a bit higher top end like Vivien, Monsters' Advocate and Vorinclex, Monstrous Raider and then play 4x Dryad of the Ilysian Grove and 4x The World Tree to be able to cast The Prismatic Bridge consistently.

Hope that helps mate. Good luck with the deck!