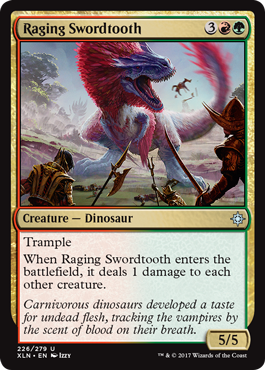 Trample When Raging Swordtooth enters the battlefield, it deals 1 damage to each other creature.

...and there is sooo much more

AkaAkuma I've been trying to get my hands on a Wilderness Reclamation , as it falls within the budget a bit better than other options.

TheoryCrafter I put Raging Swordtooth in and out of the deck around times, but it falls flat usually overall. I'll probably order a Marauding Raptor soon enough as it doesn't kill too many of my creatures and has good synergy. Rite of Passage is a maybe at this point.

Have you considered Marauding Raptor or Raging Swordtooth ? With Ranging Raptors and Ripjaw Raptor already in your deck, the damage getting dished out will trigger their enrage abilities. Playing Polyraptor with Marauding Raptor already on the battlefield will force a mandatory draw if you're gonna lose no matter what else you do. Also, you could also add Rite of Passage .

Good deck! I'd swap in Savage Stomp for Prey Upon. Raging Swordtooth is also good for triggering enrage.

Raptor Hatchling, Raging Swordtooth, Charging Monstrosaur, Thrashing Brontodon, Rile - there is a tutorial for that right under the comment box.

You have too many enablers and fewer cards - deathgorge scavengers as 4-of is too many, it will starve most of the time; 4 migration, 4 drover and 3 otepec are too many mana cards - cut the 3 otepec, as they are unnecessary with 4 regisaur.