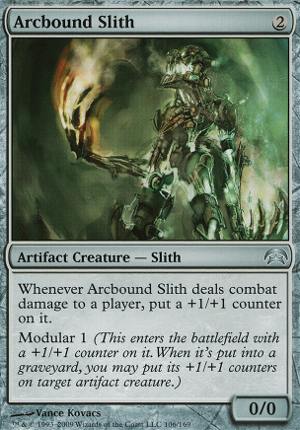 Whenever Arcbound Slith deals combat damage to a player, put a +1/+1 counter on it.

Modular 1 (This enters the battlefield with a +1/+1 counter on it. When it's put into a graveyard, you may put its +1/+1 counters on target artifact creature.) 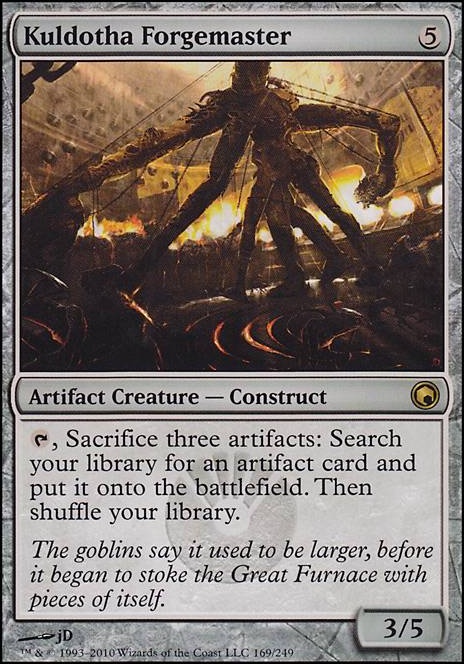 A Deadly Rose
by IkeDaddyDeluxe

Depending on how competitive you want to make this deck you want to consider serveral options all depending on your budget. I would reccomend if your creating a more casual deck you might want more card draw effects, such as Curiosity or Curious Obsession . Additionally having more ways to defend your powered up creatures will be critical to your gameplan; adding Mizzium Skin or Dive Down effects might be really handy. If your going for something as close to top tier as you can take it I would also add in more counterspells such as Stubborn Denial and throw in Hexproof threats such as Slippery Bogle and Invisible Stalker . Also if you want to be super jank replace more of your creatures with: Arcbound Slith , Slith Firewalker and Slith Strider .

Apologies if this has been brought up already.

I'm building an Oathbreaker deck around Saheeli, Sublime Artificer . If Panharmonicon and Animation Module are both on the field and I cast Arcbound Slith , does animation module count as a triggered ability, triggering panharmonicon, basically letting me pay 2 at the cost of a single spell?

Arcbound Reclaimer has some utility use, especially in multiples with Grim Haruspex or Fecundity, and can go infinite with Dross Scorpion and AEther Vial, but a lot of those pieces have CMC 4 so meh.

Arcbound Slith I want so hard to like, but it needs to do damage to tge player, and as a 1/1 thats just so hard to make pay off consistently.

Arcbound Crusher can be a good addition if you need a trampler to pull a finisher, and it just grows and grows. A nice alternative though could be Avatar of the Resolute. As an early draw he's just good value and in a deck like this as a late draw he could be considerably more powerful.

Cards I'm thinking of adding to make this a +1/+1, Modular, Artifact-Heavy theme (idea taken from here), as well as add more ramp: