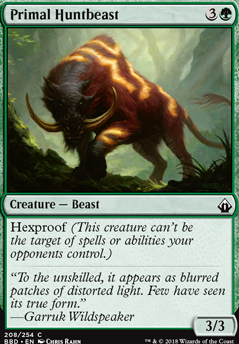 MagicMarc Lot of suggestions there! I'll try the full Slippery Bogle --> Paradise Druid switch, but I'm a little concerned about the progression of the first couple turns. Adding more Sylvan Caryatid s was on my list, but I'll need to get more copies. Muddle the Mixture is good, I can get that done. I'll try out Fierce Empath and Reason / Believe ; I had Reason / Believe in for a while, and it worked well.

Thanks for the thoughts!

I like your deck. Looks like it would be a lot of fun for casual games. I also have some suggestions:

I would replace all the copies of Slippery Bogle with Paradise Druid . You get hexproof and can tap for colored mana. Which helps address your mana issues you mention in the description. And up the count of your Sylvan Caryatid s.
I would also consider replacing the 3 copies of Turn Aside with Muddle the Mixture . It counters instant and sorceries which would be the primary targets for Turn Aside anyways. Then it can also transmute for Spy Kit , Cream of the Crop , Sylvan Caryatid and Paradise Druid . (If you added it).
I would also suggest getting 2 or more copies of Fierce Empath which would let you tutor your giant monsters.
Then once you get them in hand you can use Retraced Image of course. Or put them on top of your library with Brainstorm for Mitotic Manipulation .
I would also suggest a mana rock if you continue to have mana problems whether or not you add Paradise Druid . Something like Simic Keyrune would be good since it can also transform into a hexproof creature for your combo.
I like Reason / Believe in your maybeboard too. Scrys and it can also put them into play with the Aftermath side. Synergizes nicely with the deck though not sure where you would cut until you even out your other issues.

you can use Slippery Bogle.