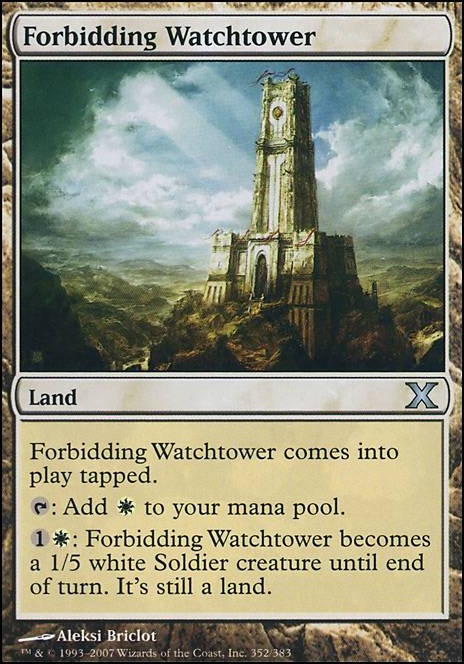 {1},{W}: Forbidding Watchtower becomes a 1/5 white Soldier creature until end of turn. It's still a land.

Forbidding Watchtower occurrence in decks from the last year

Obelisks, the Ultimate Tribe
by FrancoisParfait 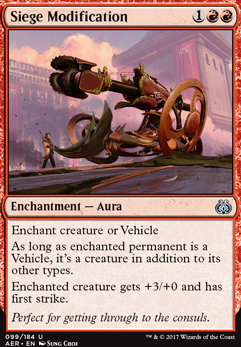 Now I've realized you have 73 cards. That's a lot of cards.

I agree with most of what Apollo_Paladin said. In addition to that I say:

Hahah me neither! I've seen that card many times and have never noticed that detail. I was also looking over your list and perhaps some manlands such as Forbidding Watchtower and Stirring Wildwood could be another win condition?

Slagwurm Armor:I like the card, but the problem is I'd have to take a card out, any idea what card(s) I should take out?

Oathsworn Giant:It is a nice anthem effect, but since it is on a creature it'll get removed easily. I'd rather play an enchantment or artifact.

Forbidding Watchtower: Definitely! I love myself some flavor!

Geist of the Archives: Depends if I'll find a wall to take out.

Sight of the Scalelords:This is what I meant with the oathsworn giant. Nice card.

Forgotten Ancient: But he doesn't have defender though.

Verdant Sun's Avatar: I already have this one in the form of Angelic Chorus.

Belligerent Brontodon: It doesn't let creatures with defender attack though, which both arcades and Assault Formation do.

Bramble Sovereign: I already thought about this one, but it will depend if I want to spend the money on it.

It's really good to have a few manlands in polymorph decks as they also work as polymorph/staff targets in case you fail to keep tokens alive. Forbidding Watchtower or Faerie Conclave are good budget options.